Sri Lanka's stand-in captain Angelo Mathews made no bones about the fact that the string of defeats has had "damaging" effect on their morale ahead of the ICC World T20 in India.

Mirpur: Sri Lanka‘s stand-in captain Angelo Mathews made no bones about the fact that the string of defeats has had “damaging” effect on their morale ahead of the ICC World T20 in India starting next week. “It’s quite damaging, especially for the confidence level and the morale. You can’t keep losing, it’s difficult to digest. We haven’t played our best yet and the most worrying thing is that we haven’t clicked as a batting order. So close to the World T20, we have to connect the dots together and maybe try a few combinations,” an upset Mathews said after losing to India by five wickets last night. FULL CRICKET SCORECARD: India vs Sri Lanka, Asia Cup 2016, Match 7 at Dhaka

While Lasith Malinga is the T20 captain and Mathews is the leader in the other two formats, it was evident from his answers that he is certainly not happy with the team that has been selected. When a specific question was asked about a horribly out-of-form Tillekaratne Dilshan, Mathews’ disappointment was evident in his reply. “I think everybody hits a rough patch, and he (Dilshan) has had a few rough patches here and there. We all need to take responsibility. Not just the seniors. The selectors and the captain have picked a squad, which they think is good. And so we have to try and go out there with who we have in the squad. We need to have faith in them and move forward,” Mathews gave a loaded answer saying a lot without actually saying much. READ: India vs Sri Lanka, Asia Cup T20 2016, Match 7 at Dhaka, Highlights from 1st innings

The key to India’s success in T20, according to Mathews, has been identifying the core group of players and then forming a winning combination with it. “Indians have been playing really good cricket in the past couple of years. They have been patient and sticking to a squad they thought was going to be their team for the World Cup,” Mathews said.

“That’s what you’ve got to do, stick with a team and be patient. Be patient with whoever you pick without chopping and changing too much, especially before the Asia Cup and World Cup. You have to be ready to go. You have to chop and change and check combinations before,” he added.

For Sri Lanka, dependence on seniors especially when the team is going through transition phase has been a factor. However, Mathews has time and again said that transition phase cannot be used as an excuse for losing too many matches. “I am repeating myself every day we have the team we have, we are depending on a handful of seniors most of the time. If the seniors fail, we are in a spot of bother most of the time. Especially in a tournament like the Asia Cup and the World Cup, you need a lot of seniors in the team.

Unfortunately we haven’t clicked. “It will take a little time for the younger guys to start performing. We have to be patient, but unfortunately, this is not the right time to be patient,” the desperation was writ large in the body language of Sri Lanka’s current best player. 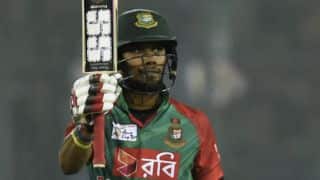