It was built specifically for the vast number of Asian labourers who have poured into Qatar.

In a nondescript corner of Doha’s Industrial Area, sandwiched between building works, a dusty landscape and overused roads, sits a green oasis for Asian labourers and cricket enthusiasts. The Asian Town Cricket Stadium is a colourful place of rest and recreation in a mostly grey-looking part of Qatar‘s capital that serves as the engine room of the country’s booming economy, full of small industrial workshops, factories and labourers.

A large orange and blue-seated amphitheatre, the stadium’s capacity — 14,000 — seems even more remarkable considering Qataris do not play cricket and it is used mostly by amateurs. The ground is actually larger than the stadium housing Qatar’s current football champions, Lekhwiya, and rivals Al-Sadd, where Xavi Hernandez, formerly of Barcelona, will play next season.

Asian Town is less than 2,000 seats short of the SWALEC stadium capacity where this summer’s first Ashes test between England and Australia, arguably the fiercest rivalry in cricket, starts on Wednesday. Like many things in Qatar, the stadium owes its existence to the phenomenal change the energy-rich country has undergone in recent years.

It was built specifically for the vast number of labourers who have poured into Qatar, particularly from countries such as India, Pakistan, Bangladesh and Sri Lanka. Between them, migrants from these four countries account for almost one million of the 2.3 million people in Qatar, which has faced criticism for the treatment of foreign workers.

On the night AFP visited, a T20 match was being held under floodlights between the ‘Shah XI’, mostly made up of players from Pakistan, and the eventual victors ‘Al Zaman Exchange’, drawn largely from India.

The standard was high though there was a sparse Asian crowd — it was the middle of the week and during the Muslim fasting month of Ramadan. “The labourers are living very near that’s why they come,” said tournament organiser, Sajjad Chaudhry. “They are coming and watching, especially the teams’ supporters and friends, and especially people who have spent a long time in Qatar, who haven’t seen this kind of facilities.”

One of those who attends a game every night is mechanic Nitiss Sikder, a 35-year-old from Kolkata in eastern India. He has been living in Doha for eight years and is a self-confessed cricket lover. Sikder is among the few regulars at the moment but that might be about to change. A far bigger building has been completed nearby.

‘Labour City’ — Qatari place names may not be imaginative but are accurate — a vast sand-coloured housing complex for 70,000 workers is just opening its doors. Seven such “cities” will in total house 258,000 labourers as Qatar attempts to build a better reputation on accommodation for foreign labourers. It could also provide a boon for Asian Town Cricket Stadium. Shah Zaleri Sikka, an Indian cricket supporter, was one of the first to move into Labour City. 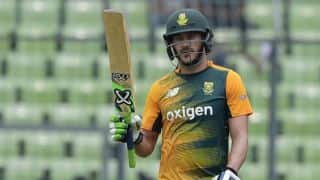