Serving a five-year ban for involvement in spot-fixing, Pakistan pacer Mohammad Asif says he has been watching James Anderson's performance against India very closely and would try employing the England seamer's tactics if he manages to make a comeback. 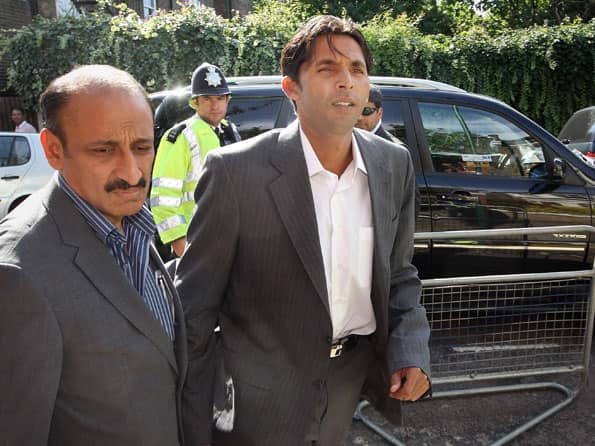 Serving a five-year ban for involvement in spot-fixing, Pakistan pacer Mohammad Asif says he has been watching James Anderson’s performance against India very closely and would try employing the England seamer’s tactics if he manages to make a comeback.

“I have watched James Anderson’s bowling very closely again and again and it has been very interesting watching him bowl. When I come back to cricket even after the time away I will be thinking about how Anderson bowled against India and will use that for my benefit. If you think you are the finished article and don’t need to learn from others then you are wrong,” Asif told ‘pakpassion.net’.

“I love watching Test cricket. Test cricket for me is the pinnacle, the real deal. The England versus India Test series was fascinating, I really enjoyed it. I watched more of the England vs India match as I wanted to see Anderson bowling,” he said.

Asif also felt that Anderson is bowling with the similar skills and tactics that he had previously used.

“Only someone like myself who has bowled like Anderson, with a similar style of bowling can truly appreciate what he is doing with the cricket ball and how well he is bowling these days. Anderson has not been playing cricket against the Indians, he has been playing with their minds,” he elaborated.

“He has truly out-thought and baffled the Indians with his artistry and skill. It reminded me so much of what (Mohammad) Amir and I did at times last year to the Australian and English batsmen. If Anderson carries on bowling the way he has been recently and continues to improve then he can become a cricket legend,” he said.

Asif has admitted that being caught up in the spot-fixing scandal and then being banned has been mentally very tough for him and the events had left him extremely disappointed.

“Mentally, it’s been really tough. Cricket is my life and always will be, and for that to be taken away from me in the circumstances it was, has been terribly difficult to cope with,” Asif said.

“When you have served your country as a professional sportsman, then you don’t want that to ever be taken away from you. I’ve been practising regularly with some of my friends but it’s heartbreaking to think that not so long ago I was playing cricket at the top tier of the game and now I’m occasionally playing nowhere near that standard,” he added.

Asked about his future, Asif, who has taken 106 wickets in 23 Tests, said it was difficult for him to predict where he would be in four year’s time when the ban ends.

“It’s four years into the future, it’s difficult to predict what can happen in those four years I don’t know what the situation will be like in four years. I guess only time will tell. Anyone who has been involved in the game finds it hard to totally move away from the sport,” he added.

The pace bowler maintained he was innocent and said the Pakistan Cricket Board had not done enough to help him.

“I am confident of being cleared of the criminal charges at next month’s trial under the Prevention of Corruption Act 1906 at Southwark Crown Court, London,” he said.

“I’m hopeful that I will be cleared of everything and I can resume playing cricket again as soon as possible. Whoever committed any alleged crime, the Pakistan Cricket Board should have dealt with that individual and taken the appropriate action against that individual.

The PCB had taken offence to Asif’s complaint against it, insisting it had done everything in its power to assist the players during the spot-fixing scandal.(PTI)

Cook's approach in ODIs reminiscent of Dravid and Jayawardena