Assam remain in second place in the table behind leaders Bengal.

A four-wicket haul by pacer Abu Nechim Ahmed and half century by Sibsankar Roy kept Assam in hunt for a berth in the main round as they downed Tripura by 11 runs in the East Zone league for the Syed Mushtaq Ali Trophy T20 tournament played on Thursday.

In pursuit of 153, Tripura were in control with 87 for three in the 13th over but Abu Nechim (4 for 21) triggered the collapse picking twice in the next over and they went on to lose three wickets without any addition to the tally.

Skipper Yogesh Takawale led the chase with 36 runs from 35 balls before left-arm spinner Parvez Aziz gave the breakthrough, while Abu Nechim dismissed the in-form Manisankar Mura Singh and Vijay Bhardwaj for ducks as Tripura were restricted to 141 for 8 to hand Assam their second successive victory.

Assam, who defeated Odisha, remained in the contention occupying second place in the table behind leaders Bengal with eight points from three matches, while it was the end of the road for Tripura after suffering a hat-trick of losses.

Roy along with Pritam Debnath (35 from 24 balls) shared a 79-run for the fifth wicket but Assam went on to lose five wickets in 16 runs that included four run-outs to fold their innings for 152 in 19.4 overs. 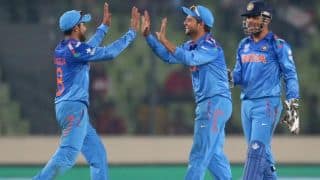 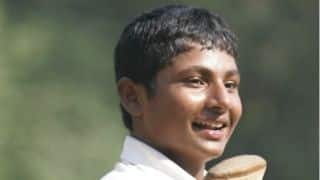