Shahid Afridi also tweeted, expressing their shock over the incident.

Karachi: Pakistan cricket community strongly condemned the attack on former captain Wasim Akram and called on the government to immediately apprehend the culprits involved in firing on the legendary pacer. Former Pakistan skipper and head of the political party, Pakistan Tehreek-e-Insaaf Imran Khan tweeted that he was glad to hear Wasim was safe. “I strongly condemn the firing on Wasim Akram’s car in Karachi. I am glad to know Wasim Akram is safe,” wrote Imran on his twitter handle. Other former and current players including Shahid Afridi also tweeted, expressing their shock over the incident and called for the culprits to be arrested immediately. “Saddened & condemned the Firing on Wasim Akram. Government should act with details to apprehend the Criminals into front,” tweeted Afridi. Cricket fans also took to the social media to vent their anger over the incident described as a case of “Road Rage” by a senior police official. Wasim Akram escapes unhurt after unidentified gunmen shot at his car in Karachi

Akram survived gunshots fired at him by an unidentified person near the National stadium in Karachi as he was going to the venue to conduct the fast bowlers camp. The shots were fired after a car jammed into Akram’s Mercedes and after an altercation, the person in the driver’s seat suddenly got out and opened fire at the former captain, who escaped unhurt. Sindh Chief Minister Sindh Syed Qaim Ali Shah also expressed shock and outrage over the incident and sought a detailed report from Inspector General Sindh Police. Gulshan SP Abid Qaimkhani told reporters that they had got CCTV footage of the entire incident and the car was being traced and the culprits would be arrested soon. “We will arrest them soon,” he said. Pakistan cricket board to launch website to tap budding talent

Pakistan opener, Ahmed Shehzad also tweeted that he had just got to know about the attack on Wasim in Karachi and said it was horrifying and it was good he was safe. Pakistan’s former stars like Saqlain Mushtaq, Moin Khan, Rashid Latif, Mohsin Khan, Basit Ali, Salahuddin Ahmed, Jalaluddin also condemned the incident. ECB files petition against Danish Kaneria for spot-fixing case 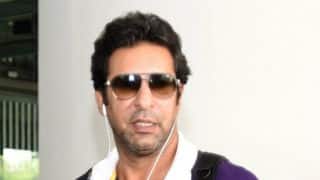 Wasim Akram: Taking out a gun and firing at someone not the way to settle things 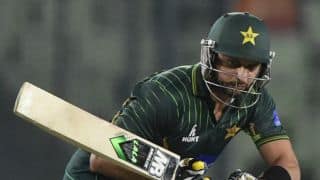