AUS vs AFG, Match 4, Cricket World Cup 2019, LIVE streaming: Teams, time in IST and where to watch on TV and online in India

AUS vs AFG, Match 4, Cricket World Cup 2019, LIVE streaming: Teams, time in IST and where to watch on TV a

What: Afghanistan vs Australia, Match 4

Weather: Mostly cloudy with a high of 24 degrees Celsius

The match starts at 6:00 PM IST. The game will be live on Star Sports 2 and Star Sports 2 HD. Live streaming available on Hotstar.

Here is today s Dream11 pick for AUS vs AFG

After edging out hosts India 3-2 in a five-match ODI series in March, Australia welcomed back Smith and Warner with open arms. But they are not expected to be given an easy ride by English fans, with former captain Smith being booed and called a cheat during the England warm-up game. 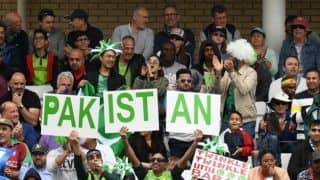