AUS vs IND Test 2020: Steve Smith Returns in The Nets, Expected to be Fit For Adelaide Test vs India Despi

Australia's star batsman Steve Smith was back doing what he does best on the eve of the first Test in Adelaide.

Australian batting mainstay Steve Smith, whose fitness became a cause of concern after he missed a training session on Tuesday, returned to the nets and batted for some time to prove his fitness on Wednesday. Putting rest to doubts over his participation in the historic first-ever day-night Test between India and Australia in Adelaide, Smith batted for a few overs in the nets session. He displayed his arrow of strokes and showed his trademark resilience during his outing.

After doing a few stretching exercises and running drills at the Adelaide Oval, Smith had skipped the routine football session and headed straight to the dressing room in some discomfort. The day-night Test against India starts on Thursday. Meanwhile, Australia captain Tim Paine said it was not a serious niggle and a day’s rest came as a ‘blessing in disguise’ for the star batsman.

Steve Smith was back doing what he does best on the eve of the first #AUSvIND Test in Adelaide.

“We expect Steve to be there. He has had a stiff back a number of times before and you can have that if you bat as much as he does at the nets,” Paine said at the pre-match media interaction in Adelaide.

“He has a stiff back before and yesterday was more precautionary. Obviously, come tomorrow, he gets through stiff back and finds a way to score runs like he always does,” he added.

Australia have already been hit by multiple injuries, with David Warner – groin – and Will Pucovski – concussion – ruled out of the opening Test.

Promising all-rounder Cameron Green, who will make his Test debut on Thursday, suffered a mild concussion after being hit on the head by a shot from Jasprit Bumrah in the pink-ball warm-up match between India and Australia A in Sydney. 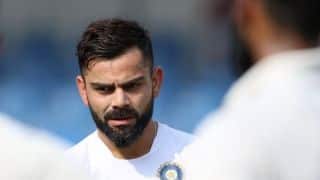