Presently, both Australia and New Zealand are comfortably placed in the points-table. While defending champions Australia is the only team to have booked a semi-final berth, the Kiwis, who are placed third, are a point away from it.

The Kane Williamson-led New Zealand side had the best possible start to the showpiece event as they were unbeaten in their initial six games before going down against Pakistan. It is their bowling attack which has performed in every game but their batting looks a bit average.

Here is today’s Dream11 pick for AUS vs NZ

The match starts at 6:00 PM IST. The game will be live on Star Network. Live streaming available on Hotstar.

AUS vs NZ Head to Head 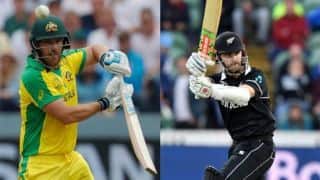 AUS vs NZ, Match 37, Cricket World Cup 2019, Australia vs New Zealand LIVE streaming: Teams, time in IST and where to watch on TV and online in India