AUS vs NZ, Match 37, Cricket World Cup 2019, Australia vs New Zealand LIVE streaming: Teams, time in IST and where to watch on TV and online in India

Peaking at the right time, Australia will resume their Trans-Tasman rivalry at the World Cup stage when they take on a New Zealand side low on confidence after its first defeat of the tournament on Saturday. Barring the defeat against India, defending champions Australia have done nothing wrong in this tournament, becoming the first team to qualify for the semifinals.

The Aaron Finch-led side is in roaring form and would look to continue the winning momentum at the hallowed Lord’s. New Zealand go into the match after suffering a defeat against Pakistan, which snapped their unbeaten streak in the tournament. The Black Caps — who have amazingly retained the same side for all their seven matches — have secured 11 points and need at least a win from their remaining two outings — against Australia and England (July 3) — to be assured of a fourth straight World Cup semifinals berth

What: Australia vs New Zealand, Match 37

Weather: Mostly sunny with a high of 33 degrees Celsius 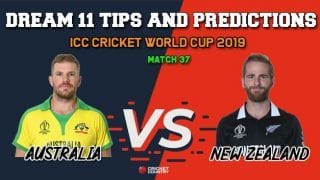 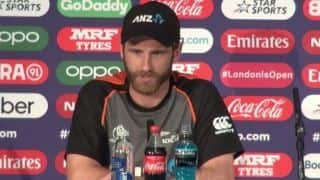 Our focus is to win games, can’t control comments on us: Kane Williamson