Australia's Michael Clarke will be determined to make a strong start in his new role as captain when he leads against Bangladesh in a one-day series starting in Dhaka on Saturday. Australia’s new captain Michael Clarke addresses media at a press conference before a training session at The Sher-e-Bangla National Cricket Stadium in Dhaka, on April 8. Australia are in Bangladesh for a series of three one day international matches starting April 9

Australia’s Michael Clarke will be determined to make a strong start in his new role as captain when he leads against Bangladesh in a one-day series starting in Dhaka on Saturday.

The stylish middle-order batsman last month replaced Ricky Ponting as skipper at a time when Australia are trying to revive their fortunes in both Test and one-day cricket.

Australia not only lost the Ashes against England at home last year but also failed in their bid to win a fourth successive World Cup when they crashed to India in the quarter-finals, both the defeats coming under Ponting.

Ponting, with 13,288 runs in 359 one-day internationals, has retained his place as batsman in the squad for three matches against Bangladesh.

“Having his (Ponting’s) experience around the group is very important for our development moving forward,” Australia vice-captain Shane Watson said Wednesday.

“We have got three games in Bangladesh with a new captain that will add a slightly new dynamic to our team. I think it’s really an exciting phase in Australian cricket.”

Australia began their tour on Thursday with a 90-run win over a Bangladesh Cricket Board team in a practice match in Dhaka, with Clarke, Ponting, Brad Haddin and Mike Hussey all scoring half-centuries.

Australia have made a few changes to their World Cup squad. David Hussey opted out of the series, while spinner Xavier Doherty and paceman James Pattinson have come in place of Jason Krezja and Shaun Tait.

Bangladesh have won just one of their 16 one-dayers against Australia, but batsman Shahriar Nafees said the hosts could make the visitors struggle.

“I think Australia will be under massive pressure. They didn’t do well in the World Cup and they’ll have a lot to prove. We have to utilise this,” the Bangladeshi batsman said ahead of the opening match.

Bangladesh, who could not make it to the World Cup quarter-finals, recalled fast bowler Mashrafe Mortaza after he missed the showpiece event due a knee injury. Shakib Al Hasan was retained as captain.

Uncapped batsman Shuvagoto Hom and all-rounder Alok Kapali were the surprise inclusions in the squad.

The last two one-dayers will be held in Dhaka on April 11 and 13. 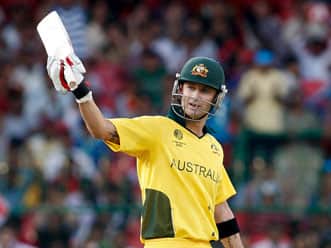