Australia 5 wickets away from 3-0 whitewash against Pakistan at lunch on Day 5, 3rd Test

Australia 5 wickets away from 3-0 whitewash against Pakistan at lunch on Day 5, 3rd Test

Younis Khan was dismissed for 13, falling 23 runs short of becoming the first Pakistan batsman in history to register 10,000 Test runs.

Australia inched closer to a 3-0 whitewash as Pakistan were struggling at 128 for 5 lunch on Day Five of the third Test at Sydney Cricket Ground (SCG). Asad Shafiq and skipper Misbah-ul-Haq were battling for Pakistan and their aim will be to delay the inevitable on the final day. Pakistan still need an improbable 337 runs to win, but it is Australia who have their tails up since they need another 5 more wickets to record a clean sweep. Pakistan got off to a disastrous start earlier in the day as Azhar Ali was dismissed in the very first over the day, playing one back to Josh Hazlewood for 11. Babar Azam, who was dismissed for a duck did not lost long either. He was once again trapped in front by Hazlewood and Pakistan had lost two wickets in the opening five overs of the day.

Things got from bad to worse as man in form Younis Khan skied the ball and Hazlewood was in action once again, claiming a simple catch at mid wicket. Younis was dismissed for 13, falling 23 runs short of becoming the first Pakistan batsman in history to register 10,000 Test runs. Yasir Shah s resistance finally came to an end after he edged on straight to second slip off Steve O Keefe. The on-field umpires checked with the third umpire if the catch was clean and it was.

Shafiq looked the most positive of the Pakistan batsmen as he attempted scoring at every opportunity. However, he had a lucky escape when he Steven Smith dropped a tough chance at second slip. Misbah and Shafiq will hope that they can play out as many overs as possible with two more sessions left in the day. They still have Sarfraz Ahmed and then the tail to follow. Mohammad Aamer will come out to bat after he did not take field on Day Four due to a side strain. He has been advised 3-4 days rest.

Pakistan were set 465 to win the third Test after Australia piled on 538 for 8 in the first innings and then followed it up with 241 for 2 in their second innings after bowling Pakistan out for 315 in their first innings. In Australia s first innings, David Warner, Peter Handscomb and 20-year-old opener Matt Renshaw all scored tons. Younis was the star for Pakistan with a determined 175 not out. Australia scored at over 7.5 in the second innings.

Warner made history in both his innings in the match. In the first innings, he became the fifth player to score a century before lunch on the first day of a Test. In the second innings, he struck a 23-ball fifty, which is the second fastest half-century in Test cricket, and the fastest for Australia.

Pakistan resumed Day Five on 55 for 1 with Azhar and nightwatchman Yasir at the crease. On Day One, Steven Smith won the toss and elected to bat first. Australia had already taken a 2-0 lead in the three-match series after securing wins in the first Test at Brisbane and then at Melbourne. If Pakistan go on to lose this match, this will be the first time they would have lost six Tests in a row. 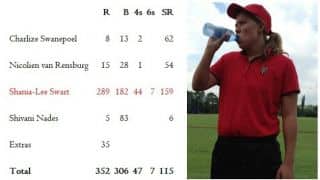 Before that 160, Shania-Lee Swart had smashed 289 when teammates got 28 Cricketers with nicknames after non-cricket personalities