England dominated the first session, reducing Australia to 72 for 3 at lunch on Day One of the third Ashes 2015 Test at Edgbaston on Wednesday. David Warner survived just six deliveires, while Steve Smith and Michael Clarke departed early as well. Warner was dismissed for 2 off six balls, getting out LBW to James Anderson. He reviewed the dismissal, but the TV replays showed that the umpire was right in adjudging him out. Steve Smith, batting at No. 3 as usual, was unable to replicate his sensational performance in the second Test at Lord’s, edging to slip for 7 off 18 balls. His namesake Steven Finn, bowling his first over of The Ashes 2015, was hit for a boundary but responded with the ideal delivery. It pitched on middle and off, swung just enough to take the edge, and went to Alastair Cook at slip. Australia were reduced to 18 for 2, with both of their form batsmen back in the hut. In walked Michael Clarke, who was immediately troubled by Finn. READ: Live Blog: England vs Australia 2015, 3rd Test at Edgbaston

Clarke managed to get a couple of streaky boundaries before being clean bowled by a Finn yorker for a run-a-ball 10. Rain then interrupted play for a while, but not a lot of time was lost. Chris Rogers played a chancy innings, frequently hitting the ball in the air but in the gaps, while Adam Voges played a compact innings to ensure that Australia lost no more wickets at lunch. Australia crushed England by 405 runs in the second Test at Lord’s after England recorded a 169-run win in the opener at Cardiff. There was a shadow of doubt over Chris Rogers’ availability after he was struck on the head. England made two changes, with Gary Ballance and Mark Wood being replaced by Jonny Bairstow and Finn. Australia made no changes, with Brad Haddin staying out in favour of Peter Nevill. READ: Live Scorecard: England vs Australia 2015, 3rd Test at Edgbaston 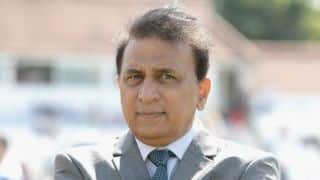 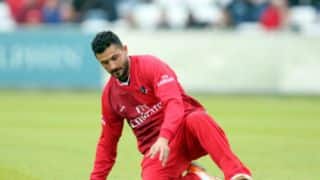