The 2019 Ashes in England is slated for two weeks after the conclusion of the ICC World Cup.

It has been 17 years since Australia last captured the Ashes on English soil. The last time it happened was back in 2001 under Steve Waugh when they won 4-1 and since then, have returned empty handed, losing on all four occasions.

The 2019 Ashes in England is slated for two weeks after the conclusion of the ICC World Cup, also in England. To ensure the members are fully prepared for consecutive series of such magnitude, Cricket Australia (CA) will send an A team to for an exhaustive tour of England in order to attain familiarity with the conditions and the Duke ball which offers more swing. The tour will coincide with the world cup.

There are plans to play both limited-overs and red-ball cricket.

“We are acutely aware of the difficulty in having a marquee series like the Ashes so soon after a Cricket World Cup,” CA’s Head of Cricket Operations, Peter Roach was quoted as saying by cricket.com.au on Tuesday.

An early exit from the World Cup will mean the squad joining the touring party. In case Australia reach the final, there’s a four-day match to get the limited-overs squad up to speed.

“To that end, we will have our Australia A team touring before the Ashes begins, and we have plans in place that, even if we make the World Cup final, our World Cup players that form part of our Ashes campaign will still play at least one four-day match in preparation, as well as being involved in an elongated pre-Ashes camp,” he said.

“Should we bow out of the World Cup earlier, there will be opportunities to feed our players into the Australia A four-day program.” 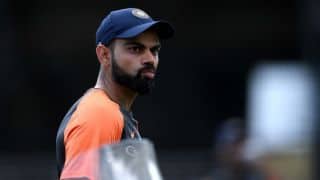