Australian cricket has been in the doldrums since the triple suspension of Steven Smith, David Warner, and Cameron Bancroft earlier this year. The bowling has not really taken a hit, but the batting has really been jolted. To make things worse, the future does not look too bright, as Shane Warne told Fox Sports: I think with Australian cricket there are lots of concerns. One is talent coming through, why isn t the talent coming through? I can t think of one young batsman that s come through from any state that you think this guy is going to be the next superstar of Australian cricket .

Our batting, the top six positions who are the two certainties that we re going to play? Probably Shaun Marsh and [Usman] Khawaja are our two best batsmen. They re good players, don t get me wrong but who are the other four batters that we re going to have in the side? I don t think we have six genuine Test match batsmen, of genuine Test-match class.

We look at the Australian system, the Sheffield Shield and the pool to pick from and I scratch my head. I m trying to be realistic and I m trying to be positive but I m really worried about our batsmen against quality bowling, spin or fast … We ve got to accept we re a very average batting team our bowlers save us.

However, Warne also pointed out the upside of the current scenario: The exciting thing for me is the opportunity. I think we should be looking at players that have not so much got averages, but character, technique; they get runs when it counts, all those things. A throwback to Allan Border s brigade of the mid-1980s, perhaps?

I d be picking guys that have toughness of character rather than good averages. I want to know the personality and character and the size of the heart of the player at the moment. They ve got to fight and not give up.

I think the opportunity that is available to people is the exciting thing to look forward to and also our bowlers. We ve got to be excited about them. When they re all fit and playing we ve got one of the best bowling attacks in the world, if not the best. 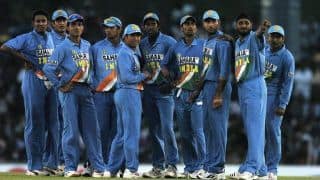