The Australian cricketers behaved like "sitting ducks" in the opening two Test losses against India, said wicket-keeper Matthew Wade as he called on his teammates to be more aggressive and take some load off skipper Michael Clarke. 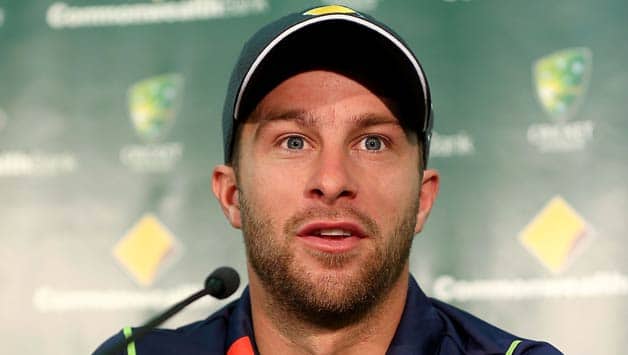 The Australian cricketers behaved like “sitting ducks” in the opening two Test losses against India, said wicket-keeper Matthew Wade as he called on his teammates to be more aggressive and take some load off skipper Michael Clarke.

“We’re just sitting ducks. We’ve got to try to be a little bit more aggressive and put the pressure back on their bowlers,” Wade said.

“We might have to be a little bit more aggressive at times to get India to do something different because if they get into a rhythm and just bowl dot after dot, the game’s not going anywhere for us,” he was quoted as saying by the Australian media.

Australia were completely outplayed in the first two Tests, especially in batting, and the team’s over-reliance on in-form Clarke was thoroughly exposed.

Wade said the Aussies need to take some pressure off Clarke in the remaining two Tests. The third Test is scheduled to be played in Mohali from March 14.

“No doubt. Michael has had to score a truckload of runs for us. I felt very disappointed when I got out in (the second) Test match,” Wade said.

“We’d put on nearly 150 runs and we were both really going. If I could have hung around with him, it could have been endless.

“Individually we’d like to stick around with him and help him out a little bit more and take the pressure off him. But I’m sure he’s going to keep scoring runs no matter what,” he added.

Wade, who played through pain in the Hyderabad Test after a freak training injury left him with a fractured cheek bone, conceded that the team has alsi let the coaching staff down.

“They’ve been very positive with us. They can only be positive for so long, though. We’ve got to put results on the board. They give everything to us,” Wade said.

“At training they throw balls non-stop to us and put a massive amount of energy into our games. It’s time in the next Test match that we repay them by getting runs and taking wickets and winning a Test match.

“They’ve been super positive and very good for us mentally and technically. It’s about time we put it on the field now.”

Wade said the Aussies have had a tough time acclimatising to the conditions in India.

“Definitely. Coming from Australian conditions to these conditions is a massive difference and it has taken a little bit of time to adapt,” he said.

“But that’s no excuse. We had two trial games where our batters got good innings and our bowlers had a good bowl.