Australian bowlers pushed England back with wickets at regular intervals to win the fifth and final One-Day International (ODI) by five runs at the Adelaide Oval on January 26, 2014. England were chasing a 218-run target, but were bowled out for 212 with two balls remaining. Australia have won the ODI series 4-1.

Earlier, Australia captain Michael Clarke won the toss and elected to bat first. Australia’s middle and lower-order combined to guide them to 217 for nine. Most of Australia’s top-order were dismissed cheaply by the England bowlers.

Chasing a meagre 218, England openers Alastair Cook and Ian Bell were ultra-cautious but their plans soon started to go awry. Bell (14) departed after nicking one to Aaron Finch off the bowling of Nathan Coulter-Nile. The experiment of promoting England’s find of the tour — Ben Stokes — bit the dust after Clint McKay removed the southpaw for a duck. England were in trouble with the score at 29 for two.

Joe Root joined captain Cook and stemmed the rot watchfully. Root was the more fluid one of the duo and laid a solid platform for a second win on the bounce for the poms.

England’s hopes yet again suffered a jolt when the outstanding Coulter-Nile removed Cook for 39. Cook and Root had piled on 61 for the third wicket.

Eoin Morgan, unlike other batsmen in the match, was at ease and was well supported by Root at the other end. The baby-faced Englishman soon brought up his half-century.

James Faulkner came back into the attack and once again proved his match-winning abilities, removing the well set Root (55) and Morgan (39) in quick succession and was game on again.

Sensing blood, Australia kept the foot on the pedal, not allowing England batsmen to settle down. Coulter-Nile removed Jos Buttler (5) and McKay cleaned up Stuart Broad’s (7) stumps. Tim Bresnan played a cameo towards the end but a mix up with Ravi Bopara saw the end of the Bresnan.

With England eight down with 14 runs to chase, the onus was on Ravi Bopara to see England through but totally choked after nicking McKay to Matthew Wade behind the stumps with eight runs left to chase.

Chris Jordan and last man James Tredwell were left with the task of chasing eight from the last over. With the main Australian bowlers finishing their quota of overs, Shane Watson was brought to bowl his crafty medium-pacers. The burly all-rounder removed Tredwell on the fourth ball of the last over.

Australia had won their ninth international match in the current England tour. Faulkner was the Man of the Match for his two wickets and 27 runs in Australia’s innings. Finch was the Man of the Series for scoring 258 runs in the series with two centuries. Australia also regained the No 1 ranking in ODIs after the win, pushing India into second place.

Man of the Series: Aaron Finch 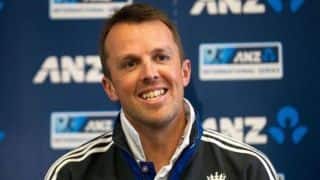 Australia reclaim No 1 spot from India in ICC ODI rankings