Michael Hussey steered Australia to a series-clinching three-wicket win in the third and final one-day international against South Africa at Kingsmead on Friday. 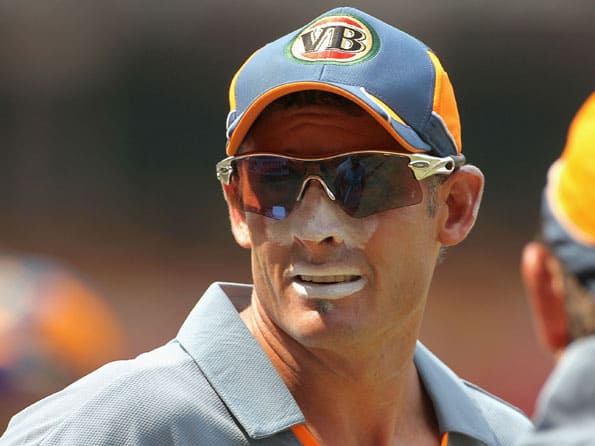 Michael Hussey steered Australia to a series-clinching three-wicket win in the third and final one-day international against South Africa at Kingsmead on Friday.

Australia were on top for most of the match but lost wickets at vital times in chasing a modest target of 223. Hussey, though, stood firm in an innings of 45 not out, finishing the contest with a pull for six off Morne Morkel with 15 balls to spare.

“There were a few nerves up in the change room but once again he’s performed under pressure,” said Australian captain Michael Clarke of Hussey’s effort.

Both teams struggled to score quickly on a pitch which had bounce but lacked pace, especially after the shine was off the two white balls used in each innings.

Although it was Hussey who saw his side home in a tense finish, Shane Watson earned the man of the match award, bowling accurately and batting aggressively at the start of his team’s innings. Watson did not take a wicket with his medium-paced bowling but conceded only 42 runs in 10 overs as he and his fellow bowlers kept a tight clamp on the South African batsmen.

Watson then played the most aggressive innings of the match, hitting 49 off 46 balls with six fours and a six. His six was a straight hit off fast bowler Morkel, who had to be taken out of the South African attack after conceding 25 runs in his first two overs, despite taking the wicket of David Warner.

Morkel, who went to the top of the world one-day bowling rankings after a match-winning performance in the second match in Port Elizabeth on Sunday, ended up conceding 61 runs in 9.3 overs.

Australia clinched the series 2-1, maintaining an unbeaten record in Test and one-day series since Clarke was appointed captain after the World Cup earlier this year.

“We’ve seen throughout the one-day series how close the two teams are and I’m certain the Test series is going to be no different. But I’d like to come out on top there as well,” he said.

Hashim Amla and Jacques Kallis hit half-centuries but South Africa were unable to dominate Australia’s bowlers in scoring 222 for six after winning the toss and batting on a heavily overcast day.

Amla made 52 and Kallis 54 but both needed more than 70 balls to make their runs and were out soon after achieving their half-centuries. It was an impressive comeback by the tourists after South Africa scored 22 runs in the first two overs, including four boundaries by Amla off Pat Cummins.

Bollinger did not take a wicket but conceded only 43 runs despite bowling four wides, one of which went for an extra four runs, while Johnson took two for 37.

South African captain Amla admitted his team had not scored enough runs. “We couldn’t get any momentum in the last 10 overs,” he said. “But we fought well to get them seven down.”(AFP)