Australia clinched the cricket tri-series title as they relied on a spirited bowling display to beat Sri Lanka by 16 runs in a low-scoring thriller on Thursday. 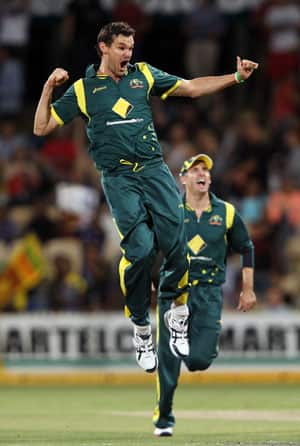 Australia clinched the cricket tri-series title as they relied on a spirited bowling display to beat Sri Lanka by 16 runs in a low-scoring thriller on Thursday.

After posting 231 all out on a difficult Adelaide Oval track, the hosts rode on pacer Clint McKay’s five-for to stop Sri Lanka at 215 in the third and deciding final.

Upul Tharanga hit 71 to help the islanders recovered from early jolts and almost put his side on track for a win but the Sri Lankans lost the plot after his dismissal to give the Australians a victory with seven balls to spare.

McKay was Australia’s hero, making a critical 28 batting at number nine and then claiming five for 28 which broke the visitors’ back.

The Sri Lankan top order failed and hard as the other batsmen rallied, it was not enough to win them the day. They lost too many wickets up front and were 53 for four in the first powerplay of 10 overs itself.

Brett Lee (3 for 59) and McKay wreaked havoc in this period by sharing these wickets and leaving too much for the rest of the batters to achieve in the remaining overs.

Tillakaratne Dilshan (8) got a leading edge while trying to work a delivery on the onside in Lee’s second over and fell to a soft dismissal, caught in the covers, in the third over.

Kumar Sangakkara (19) was off the block in a jiffy, striking three fours in his nine balls, before he became Lee’s second victim, driving a catch to slips in the seventh over.

Things were only to turn worse as McKay claimed two wickets in seven balls to leave Sri Lanka tottering at 53 for four. He first won a LBW shout against Dinesh Chandimal (5) and in his next over, cleaned up skipper Mahela Jayawardene (15), who played down the wrong line and having his stumps in a disarray.

Sri Lanka lost their sixth wicket on 142 when Chamara Kapugdeara (7) tried to steer McKay but only thick-edged a chance to wicketkeeper Wade.

Nuwan Kulasekara’s (15) presence at the crease brought some excitement but today was not his day as he made room to smash Lee but the bowler followed him on the legside and he could only lob it for mid-on to take an easy catch.

Left-handed Tharanga, all this while, kept one end going, playing slowly but surely, as he raised his half century from 94 balls with three fours.

Pressure began to mount as the Lankans reached their 200 for the loss of seven wickets in the 45th over, requiring only 30 runs from the final five overs.

Watson earned a critical wicket in the 46th over when Tharanga edged a slower delivery to wicketkeeper Wade for 71, made from 122 balls with three fours and a six. Lanka needed 28 runs from the final four overs with two wickets in hand.

It proved too much for the visitors as they lost their final two wickets to McKay in the form of bowled dismissals to leave the hosts winner by 16 runs.

Earlier, the Australian middle-order collapsed like a pack of cards as Sri Lanka restricted the hosts to 231.

The hosts were cruising along at 115 for 1 before a middle-order slump saw them get all-out in 49.3 overs.

Things could have got worse but for Lee (32) and McKay (28) who added 40 valuable runs for the eighth wicket.

The islanders were well served by nearly all five bowlers, none better than medium-pacer Ferveez Maharoof (3 for 40) and Rangana Herath (3 for 36) who triggered the collapse with six wickets between them.

Warner, fresh from his two successive centuries, was the early aggressor as he slammed 48 off 45 balls with five fours and a six before being caught behind off Maharoof.

Wade, then found an able partner in stand-in skipper Shane Watson (19) put on 40 runs in next six-odd overs before the wheels came off the Lankan innings.

Once Watson fell to the off-spin of Dilshan, Maharoof and Herath wreaked havoc on the hosts on a slow pitch, mixing up their deliveries, and costing Australia five more wickets for 58 runs in a space of 15-odd overs.

Watson and Wade fell within an over of each other —the skipper brilliantly caught at the deep midwicket fence when he swept Dilshan fiercely and Herath flung himself to his right to bring off an outstanding catch.

It appeared to have shell-shocked Wade who steered Nuwan Kulasekara to short point and as non-striker Mike Hussey dashed down from the non-striker’s end only to find Dilshan’s direct throw catching him well short off his ground.

Two overs later, it was Wade’s turn to trace his steps back home, cutting Herath into the hands of Sangakkara who took a juggling catch. Wade’s 49 off 74 balls didn’t last the distance as he wanted to and left the innings in the hands of two new batsmen.

Herath struck with scalp of Peter Forrest (3) who played the wrong line to see his off-stump disturbed in 27th over.

Australia’s misery was far from over. David Hussey (19) was ruled out by umpire Asad Rauf off Maharoof though the ball appeared to have hit his pads a shade above the stumps.

Dan Christian (19) got couple of boundaries off Herath but was fooled by a slower Maharoof delivery, mistiming a drive straight into the hands of Sri Lankan skipper Mahela Jayawardene at mid-off.

The smart recovery for the eighth wicket which added 40 runs and took the innings to 46th over, was not good enough to see through Herath. The left-arm spinner struck with his second last ball, fooling McKay into hitting one into the deep. McKay made 28 off 32 balls with three fours and six and Australians were now 217 for 8.

Man of the Match: Clint McKay

Man of the Series: Tillakaratne Dilshan