Australia were set a difficult target of 192 to win the first Test after their pace attack worked its way through the West Indies tail to dismiss them for 148 on the fifth and final day on Wednesday. 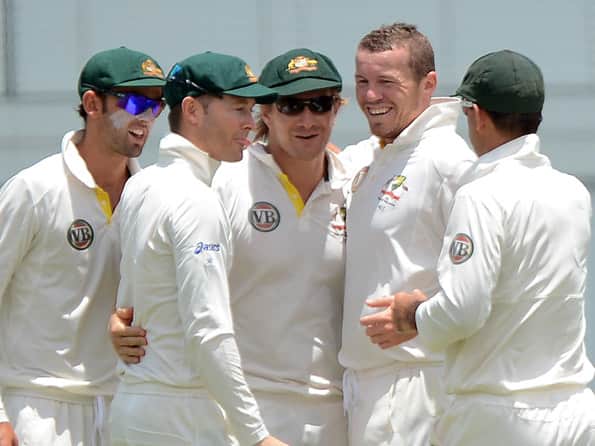 Australia were set a difficult target of 192 to win the first Test after their pace attack worked its way through the West Indies tail to dismiss them for 148 on the fifth and final day on Wednesday.

West Indies coach Otis Gibson had said after stumps on the fourth day that a target of 200 would pose the Australians problems and his players fell just eight short of that.

The hosts hadn’t looked like getting anywhere near that when they started the day on 71-5 and promptly lost Narsingh Deonarine lbw to Ryan Harris.

Darren Sammy’s big hitting in the first innings had given the West Indies innings momentum but understandably he played more cautiously this time having come in at 6-75.

Having scored 12, he couldn’t restrain himself and hit a delivery by Peter Siddle straight to Nathan Lyon at long on but, somehow the ball went through Lyon’s hands and the West Indies skipper had been given a life.

Lyon would have been greatly relieved when, having only added another two runs, Shane Watson struck.

Sammy had played a delivery late and it dropped behind him and was heading towards the wicket. Sammy’s reaction was to kick the ball away but his footballing skills let him down and he only managed to knock the ball against the stumps.

The West Indies tail was now fully exposed and their lead only 149 runs.

Carlton Baugh was key to the West Indies reaching a competitive total. On 18, he edged a Ben Hilfenhaus delivery straight to first slip. Michael Clarke, who had just taken himself out of that position, crouched down in disbelief.

It wasn’t too costly as with the first ball of his next over Hilfenhaus provoked Baugh into chipping straight to Harris at mid-on and the chance was held.

Watson almost had a second when Fidel Edwards on one, hit the ball in the air to the bowler’s left but the ball didn’t stick.

The next chance that Edwards gave Watson was much easier and stuck.

He hit a ball from Siddle high in the air to Watson at mid-off – it was a poor shot to play with every run so important to the West Indies cause.

Despite working it’s way through the West Indies tail, the Australians again hadn’t had the best of days in the field.

A third catch went down when Kemar Roach, in Lyon’s first over, cut a ball that went hard to Clarke at first slip.

Neither team had managed to take the final wicket in either of the first innings and the West Indies last pair were determined to hang around again.

They batted long enough for lunch to be delayed but, having added 19 runs, Roach got an inside edge off a Harris ball and it crashed into his stumps.(AFP)