Australia bowled out for 408 after Smith, Starc's half-centuries

Australia bowled out for 408 after Smith, Starc's half-centuries

Mitchell Starc and Steven Smith missed out on centuries on Day Three of the third Test against India, as the Australians were bowled out for 408 before lunch at the PCA Stadium in Mohali on Saturday. Mitchell Starc and Steven Smith missed out on centuries on Day Three of the third Test against India, as the Australians were bowled out for 408 before lunch at the PCA Stadium in Mohali on Saturday.

Both Starc and Smith fell short of centuries as Australia went past the 400-run mark in their first innings.

Starc was left dejected when he fell for 99, caught by MS Dhoni off Ishant Sharma. His knock of 99 runs came from 144 balls and 14 boundaries.

On the other hand, Smith was stumped by Dhoni off Pragyan Ojha for 91, which came from 185 balls, studded with 10 hits to the fence and a six.

Earlier on the second day, India regained much of the ground by claiming four wickets in the final session as Australia failed to capitalise on a century partnership for the opening wicket in the third and penultimate cricket Test here today.

At stumps on the second day, Australia were 273 for seven with comeback man, Smith and Starc, batting on 58 and 20 respectively.

While Ravindra Jadeja proved to be the surprise package for India with three wickets, including two in two deliveries, it was Ishant Sharma’s late burst that pushed Australia on the backfoot after Ed Cowan and David Warner were back on track with a 139-run partnership for the first wicket after Michael Clarke opted to bat.

His flagging career on the line after a string of failures, Cowan silenced the doubting Thomases with a dogged knock of 86, which consumed 238 balls. His partner, Warner made a fluent 71 off 147 balls with help of nine fours. Cowan found the fence eight times, but will be disappointed at not being able to convert his efforts into a century, despite getting two lives.

The duo’s efforts, though, were a bit undone with the loss of seven wickets in the final two sessions of play.

Ishant had Brad Haddin and Moises Henriques bowled to reduce Australia to 244 for six late into the final session of play at the Punjab Cricket Association Stadium, where the first day was washed out due to a heavy downpour. 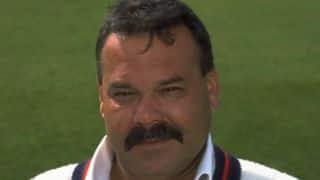 Dav Whatmore: One of the most respected coaches in the world

Ravindra Jadeja thrilled to have dismissed Michael Clarke once again