Steven Smith's 11th Test century was the highlight of a quality batting effort by the visitors.

England’s bowlers got better returns on the second day as Australia added 194 runs for the loss of seven wickets to put up 481 in their first innings. Seamer Steven Finn took three wickets, the first of which was his 100th Test scalp, and off-spinner Moeen Ali also ended with three. Steven Smith scored his 11th Test century; his partnership of 91 at almost a run a ball with Mitchell Starc, who scored 58, resurrected the falling innings. The dismissal of middle-order batsman Adam Voges facilitated a mini-collapse, as Mitchell Marsh, Peter Nevill and Mitchell Johnson exited in the latter half of the morning session. LIVE CRICKET SCORECARD: England vs Australia, 5th Test, The Oval, Day 2

Deep into the second session, the last three wickets fell quickly as well. But by that time, Australia had about enough to challenge their opponents. Starc was going along in a cavalier manner when Ben Stokes trapped him leg before wicket, to get him out for 58. Only an over earlier, his prolific batting partner Smith dragged Steven Finn on to depart for 143. The last pair of Peter Siddle and Nathan Lyon stuck around for two more overs. LIVE CRICKET UPDATES: England vs Australia, 5th Test, The Oval, Day 2

But these quick dismissals and the mini-collapse were separated by a refreshing batting alliance between Smith and Starc. While the set Smith was happy to push the bowlers around and latch on to the occasional overpitched delivery, Starc played his cuts, square drives, and even lofts without restraint. Starc hit nine fours and a six in his innings, as the partnership developed into a healthy one pretty quickly. 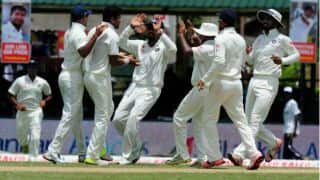