Sri Lanka swung the ball around the Gabba on Friday and dismissed Australia for just 74 runs off 26.4 overs, their lowest One-Day International total in 27 years. 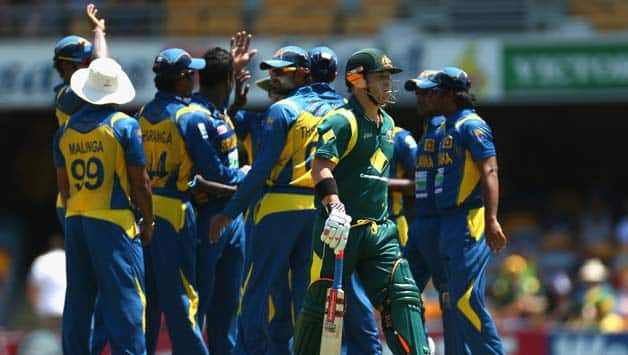 Sri Lanka swung the ball around the Gabba on Friday and dismissed Australia for just 74 runs off 26.4 overs, their lowest One-Day International total in 27 years.

Nuwan Kulasekara took five wickets for 22 and Lasith Malinga picked up three for 14.

Australia won the toss and opted to bat on a fine wicket and a warm day in Brisbane, but they fell to a prolonged inswing onslaught in the third match of a series of five which stands level at 1-1.

Australia’s lowest ODI score of 70 came against England in 1977 at Edgbaston, with the embarrassing scoreline repeated against New Zealand in 1986 at Adelaide.

Ninth man Mitchell Starc ensured they avoided those historic figures with a knock of 22, Australia’s highest score, when it had looked like no one would get into double figures.

David Warner was first to go, for four, after clubbing a catch to Shaminda Eranga at mid-off off Angelo Mathews in the third over.

Phillip Hughes had made only three when Mahela Jayawardene held a slip catch off Kulasekara who was on fire.

Skipper Michael Clarke was starting to look solid, driving for the first boundary while David Hussey followed suit with a glance for four, but it was not to last.

Hussey was given not out to a Kulasekara inswinger caught by keeper Kushal Perera, but Jayawardene won the wicket on appeal. Television replays showed a clear edge.

Australia were 3-21 in the eighth over.

The Sri Lankan swinger had George Bailey lbw first ball and then beat Clarke, one of the best Test batsmen in the world, to hit middle stump.

Sri Lanka had the hosts 5-28 and facing their lowest ever ODI score.

New boy Moises Henriques, back in the side after three years out, went two balls later with the score 6-30.
Mitchell Johnson, Matthew Wade and Clint McKay quickly followed them back to the dressing room as slinger Malinga picked up quick wickets.

Fast bowler Starc showed batting was not impossible and clipped 22 runs off 28 balls before Xavier Doherty offered a simple catch off Eranga to put an end to the innings.