Mitchell Starc replaces Billy Stanlake who has been ruled out of the series after injuring his ankle during a warm-up session on Friday.

Left-arm pacer Mitchell Starc has been added to the Australia T20I squad for the ongoing series against India. Starc replaces Billy Stanlake who has been ruled out of the series after injuring his ankle during a warm-up session on Friday.

Starc’s last T20I appearance for Australia was in September 2016 against Sri Lanka in Colombo. Should he make the playing XI for the series deciding third and final T20I in Sydney, it will be his first such game at home since February 2014.

Stanlake was a late omission from the rain-affected second T20I in Melbourne as he hurt his ankle while doing catching practice during warmup. He was replaced by Nathan Coulter-Nile.

Stanlake, 24, has a moderate grade ankle sprain which was deemed serious enough to have him rested from the series finale to be played on Sunday.

Starc alongside Josh Hazlewood and Pat Cummins was initially rested from the India T20Is to keep them fresh and in prime shape for the four-Test series against the same opponents that starts from December 6. The trio was also asked to not participate in a Sheffield Shield fixture next week as it was deemed close enough to the first India Test.

But Stanlake’s injury means Starc is in line to play on Sunday with Australia already leading 1-0 in the three-match series. The hosts cannot lose the series after the second match was washed out due to persistent rain.

After being asked to bat first by India captain Virat Kohli, Australia struggled their way to 132/7 in 19 overs thanks to Ben McDermott’s 32* and a brief cameo from Coulter-Nile (18 off 9). Rain ended the innings prematurely before the entire match was washed out ruining India’s hopes of levelling the series. 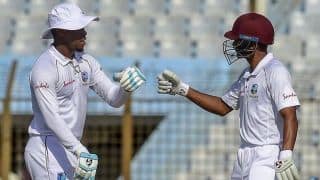