Australia Test captain Tim Paine is already preparing for the upcoming Ashes tour of England later this year, calling it as the 'biggest series' of his career.

Australia Test captain Tim Paine is already preparing for the upcoming Ashes tour of England later this year, calling it as the ‘biggest series’ of his career.

Paine says he has been batting in the nets keeping in mind the English conditions, tweaking and improving his technique to be at his best for the series.

“All the time I’m batting in the nets now, whether that’s good or bad I’m not sure, I’m thinking about batting over there (in England),” Paine told Cricbuzz. “You know the improvements I want to make to my game are for when I get there. This is obviously the biggest series I’ll ever be involved in, and I think I’ll clearly get only one chance to play an international series in England. That’s a dream come true for me as a kid growing up, watching it on telly, and realizing how big it is over there, and how hard it is to win, and being a part of a series like that is the pinnacle for me. I want to make sure I’m at my absolute best when I get over there.”

Paine’s leadership been praised since he took over the rein in controversial circumstances in the aftermath of Newlands ball-tampering scandal. While he has led the team admirably despite winning one of the three Test series he’s lead Australia, his return with the bat hasn’t been eye-catching with his last first-class hundred coming during the 2006-07 season.

At the Test level, Paine averages 35.14 with 984 runs and five half-centuries but the statistics don’t bother the 34-year-old.

“No, it doesn’t because they were pretty clear when I was picked, that I was picked because I was the best wicket-keeper in Australia, and the job they want me to do is eke out as many runs as I can with the tail. Since I’ve been back, I’ve contributed reasonably well. I’ve been pretty consistent without getting big scores, and obviously that’s something for me I would personally like to change. I’d like to score some big runs, and some important runs in a big game. I’ve certainly gained some belief in the last sort of 12 months that I’m good enough at Test level and it’s now about fine-tuning a few things and being ready for this Ashes series,” Paine said. 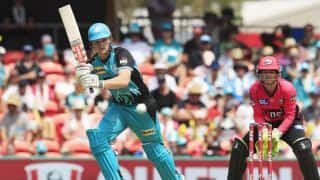