A listless India's batting failed miserably as they slumped to a massive 110-run defeat in a cricket tri-series match against Australia, who managed to get a bonus point on Sunday. 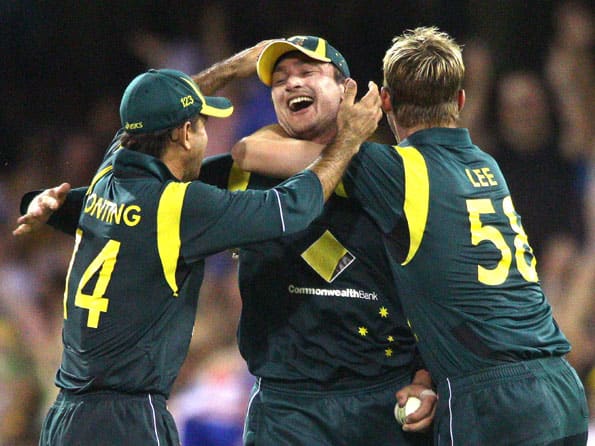 A listless India’s batting failed miserably as they slumped to a massive 110-run defeat in a cricket tri-series match against Australia, who managed to get a bonus point on Sunday.

Chasing Australia’s mammoth 288 for five, largely built around a blistering onslaught in the last 10 overs, India never really recovered after the three early jolts to fold up for 178 in 43.3 overs on a bouncy Gabba track.

The Indians were outplayed in every department of the game by the hosts who made amends for their back-to-back defeats to take top position in points table.

The top-order Indian batting crumbled in the face of some hostile bowling in early overs. The late rally by skipper Mahendra Singh Dhoni (56) only ended up in delaying the inevitable.

Pacer Ben Hilfenhaus marked his return to Australia’s one-day side with career-best figures of 5 for 33, including the scalp of Sachin Tendulkar (3) who still remains in search of his elusive 100th international century.

None of the Indian top order batted with assurance or long enough and the biggest stand of the innings was 46 which Dhoni and Suresh Raina (28) stitched between themselves for the fifth wicket.

Hilfenhaus and Brett Lee (3 for 49) were hostile on a spicy wicket and ripped out the heart of Indian batting in their first spells.

India then had a reasonable 46-run stand for the fifth wicket between Raina and Dhoni which ended when the left-hander chased a wild delivery from Dan Christian and offered a catch behind the stumps. India were now 82 for five in the 23rd over.

India lost their sixth wicket in the form of Ravinder Jadeja (18) who holed out in the deep off Christian to plunge India to 114 for 6 in the 31st over.

Dhoni though waged a lone battle and hit a spectacular one-two of a six and a four off Lee after he opted for the batting powerplay in the 35th over.

However, the pyrotechnics of Indian skipper was to end when he pulled a short delivery from Hilfenhaus into the hands of midwicket fielder.

India were 149 for 7 in the 38th over and the match was as good as over, barring the shouting.

Earlier, electing to bat, Australia recovered from a wobbly start and smashed 110 runs in the final 10 overs to post 288 for 5.

Half centuries by Peter Forrest (52) and Mike Hussey (59) and their century stand for fourth wicket help set the base before impressive cameos by Daniel Christian and David Hussey.

Christian (32 off 18 balls) and Hussey (24 off 20 balls) plundered 58 runs from the final five overs, the penultimate over by Vinay Kumar yielding 18 runs.

Irfan Pathan claimed 3/61 and Indian effort was generally good in the field but for sloppy work in the final overs.

Australia made a fine start before they fell into a quagmire in the first half of the innings.

David Warner and Matthew Wade had put on 70 runs for the first wicket by the 13th over before the innings almost came to a standstill.

Warner was set for a long innings with 43 from 46 balls (five fours and a six) before he tamely pushed a leg-stump half volley from Irfan Pathan to the lone fielder on the onside inside the ring.