At stumps on Day One will be the happier team of the two.

The final session of Day One’s play at Sabina Park confirmed Australia to be in command over this Test match. West Indies were simply not good enough after the opening hour of play when Jerome Taylor had Australia on their knees. But after that the intensity witnessed an evident drop. LIVE SCORECARD: West Indies vs Australia, 2nd Test, Kingston, 1st Day

Australia were struggling at 16 for two, with openers David Warner and Shaun Marsh dismissed cheaply by Jerome Taylor with some cleverly hostile bowling. Taylor then had Michael Clarke caught and bowled, with Australia on 22 but it turned out to be a front-foot no ball. LIVE UPDATES: West Indies vs Australia, 2nd Test, Kingston Day 1

West Indies’ spirit seemed to dampen after that blow and Steven Smith along with Clarke started rebuilding. They put on a 118-run partnership, before Clarke was guilty of wildly chasing one outside off and edged to Denesh Ramdin off Jason Holder, being dismissed for 47.

Smith by then had gone well past his half century and he wasn’t one to throw away a grand opportunity to score yet another Test hundred. He batted on and put on a formidable stand with Adam Voges. Voges then became Taylor’s third victim off the day, getting dismissed for 37 runs.

The West Indian specialist spinner, Veerasamy Permaul, was only a pale shadow of the injured Devendra Bishoo, whom he was replacing. He proved to be easy to score runs off and batsmen took the liberty to charge down the ground and hit him for a couple of sixes. Kraigg Brathwaite, a part-timer, bowled better than him.

In fact Brathwaite had Smith edging to slips, while he was on 109, only for Darren Bravo to drop it. Smith recovered well from the momentary lapse and batted well with Shane Watson at the other end to see off the day without further loss of wicket.

Australia will be quite happy with the proceedings on the day, especially given West Indies batsmen’s tendency to collapse. West Indies will eye quick wickets on Day Two or the game may as well be a lost cause for them. 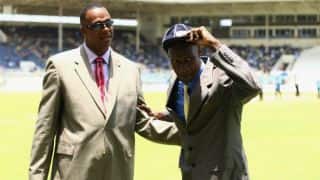 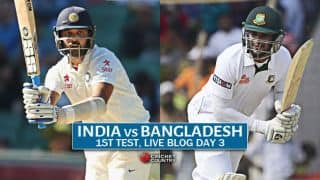