Steven Smith also said that Australia do not need to sledge the Indian team.

The speculation around the mood inside India‘s dressing room on Thursday became a subject of ridicule for Australian skipper Steve Smith, who said the home team does not need to sledge the tourists as they are busy “whingeing among themselves”. He was referring to the aftermath of the Brisbane Test which his side won by four wickets to take a 2-0 lead in the series, going into the third Test in Melbourne on Friday.

“We don’t need to sledge or talk too much. At the moment the Indians are doing it themselves. Among their group, they’re doing a lot of whingeing and complaining among themselves. They’re doing it all for us. Hopefully that can hinder them this week,” Smith said on Thursday.

“For us it’s just about going out there and doing the same thing all the time. If they want to get on with that in the dressing room, that’s up to them. We’ll just keep doing the same thing we’ve been doing and hopefully we’ll get more of the same results. Four-nil would be nice, but you got to take each game as it comes,” he added.

If Australia do manage to achieve that result, it will be a repeat of the 2011-12 tour here for India, when they lost 4-0. They had managed to inflict a similar defeat on the Australian side when they had returned to India in 2012-13.

“Obviously this series is being played in completely different conditions. We’re playing in our own backyard and that’s something we’ve done really well over the past 12 months. For us, the challenge is when we’re away to win those Test matches. Hopefully we can go three-nil up this week and finish off well in Sydney as well,” said the young captain.

Of course, Australia are placed well going into the Boxing Day Test, having won by 48 runs in Adelaide and four wickets in Brisbane. They announced their playing XI as usual with Ryan Harris returning in place of Mitchell Starc. Joe Burns will make his debut at No. 6, while misfiring Shane Watson and Brad Haddin have been retained.

“Watson was a little bit shaken up with the hit the other day but he trained well yesterday and he’s going well. If you’re batting in the top order in state cricket, you can bat anywhere in the Australian line-up. I just think that’s the best way to go about it. Shane Watson’s best suited in the top three and Joe Burns is going to slot in at six,” said Smith.

“It is tough. Mitch Marsh played beautifully over in the UAE and was starting to find his feet. It’s disappointing for him to be out through injury. Joe Burns gets his opportunity on Boxing Day and it’s going to be a very special week for him. It is a big occasion,” Smith said.

“You’ve got to try to get that out of your mind. You’ve got to enjoy it. It’s just another cricket game for him. He’s been hitting the ball really well. I’m looking forward to seeing him come out here and hopefully score a few runs in this Test match,” he added.

It will be his first Boxing Day Test as captain as well but the young skipper is not too daunted by the task at hand. In fact he might need to be extra careful with the over-rates or risk getting suspended for the Sydney Test.

“I think it’s just another cricket match. Most of us have been here before on a Boxing Day Test and it’s a great occasion to play that Test match. I’m just excited for Joe Burns coming in, and Josh Hazlewood to play his first Boxing Day Test match as well. I’m sure they’re going to enjoy this week,” said the skipper.

“I think we need to hustle through the overs a little bit more. It was obviously a tough week last week as it was extremely hot in Brisbane. Nathan Lyon will be bowling a lot more for us this match. It’s going to be exciting. Every time you walk out here in a Boxing Day Test match it’s an amazing feeling. To lead this side, it’s going to be an exciting week,” Smith signed off. 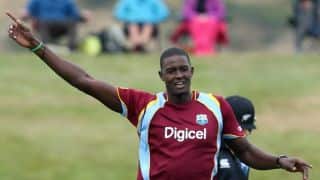