Australia routed India by an innings and 37 runs inside three days on Sunday to seal a crushing 3-0 series victory against the hapless tourists. 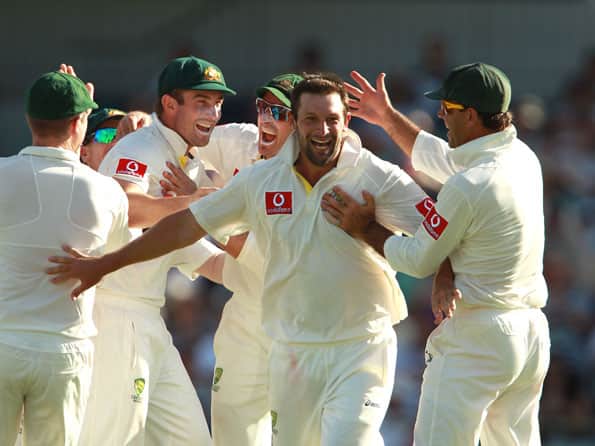 Australia routed India by an innings and 37 runs inside three days on Sunday to seal a crushing 3-0 series victory against the hapless tourists.

At Perth’s WACA Ground, Rahul Dravid and M.S. Dhoni were out before lunch and Australia cleaned up the tail for 171 soon after the break to complete their third simple win.

Despite a gritty batting performance by their most inexperienced batsman, Virat Kohli, the last man to fall for 75, it was another shoddy batting display by the tourists, whose abject display has caused consternation at home.

The world one-day champions have now lost seven straight away Tests after their 4-0 loss to England last year.

“In the games in England and here we have not put enough runs on the board,” Dhoni admitted.

“There is only one instance where we have scored over 350 runs, and you want to give bowlers those amount of runs so they can look to get the opposition out.

“One or two bad innings can happen in Test cricket, but seven Test matches is a bit long.”

Australian skipper Michael Clarke said the hosts would now go for the jugular and a series whitewash with victory in the final Test, starting in Adelaide on January 24.

“No such thing as a dead rubber for me,” Clarke said. “We haven’t achieved much at this stage.

“We should be very proud, don’t get me wrong, to beat the number two ranked Test team in this series, but we’ve got a lot of work to do before we’ll be satisfied.

“In Adelaide, you’ll see that, our goal has not changed from the first Test of this series, and it won’t change until we achieve what we want as a team.”

The Indians resumed at 88-4, needing another 120 runs to make Australia bat again, and Kohli and veteran Dravid briefly revived their hopes with a dogged 84-run stand for the fifth wicket.

However, the loss of Dravid (47) and skipper Dhoni in quick succession before lunch had Australia closing in on victory. The end came quickly after the resumption, with yet another insipid performance by the Indian tail.

Swing bowler Ben Hilfenhaus’s incredible resurgence continued when he claimed three wickets in four balls after lunch, before Peter Siddle had Kohli caught behind to seal the win.

Hilfenhaus (4-54) claimed eight wickets for the match to have 23 wickets in the series at 16 apiece.

Kohli, who also top-scored in India’s calamitous first innings with 44 as the tourists were dismissed for 161, before Australia made 369 on the back of David Warner’s explosive 180, had been fighting his way towards his maiden Test century in his seventh Test, but received no support aside from Dravid.

Dravid’s once-famed ‘wall’ defence was again breached by Ryan Harris, who knocked the 39-year-old’s leg stump out of the ground.

The delivery didn’t do anything significant off the pitch, but found the gap between bat and pad, ending the veteran’s vigilant innings after 177 minutes and 114 balls.

It was the fifth time in six innings in the series that Dravid had been bowled, and his average for the series of 28 is well down on his career average against Australia of 52.62.

Dravid has now been bowled more times in Test cricket than any other batsman — 54 times.

Dhoni again failed, caught in the slips by a diving Ricky Ponting for two from the bowling of Peter Siddle, and the skipper has made just 102 runs in the series at 20.40, with 57 of those runs coming in the first innings in Sydney.

Dhoni has not made a century in 13 Tests against Australia. (AFP)