Australia ease to win over Canada

Australia ease to win over Canada

Australia made a complete mockery of the target of 212 set by Canada when they got there in the 35th over for the loss of three wickets. 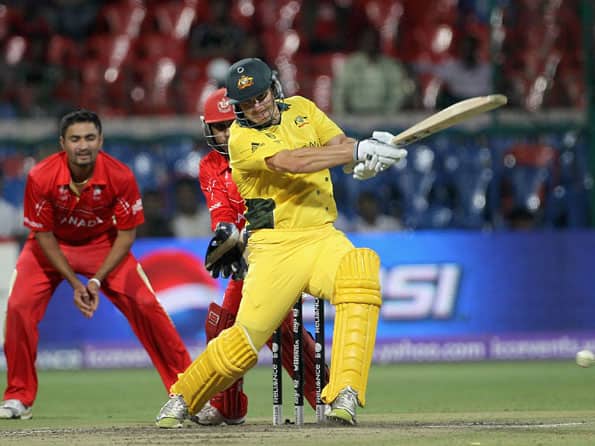 Shane Watson plays a shot during his innings of 94 against Canada at Bengaluru.

Australia made a complete mockery of the target of 212 set by Canada when they got there in the 35th over for the loss of three wickets.

Shane Watson was dropped early in the innings by Rizwan Cheema as the openers crawled to 41 without loss. Of course, apart from a dropped catch, captain Ashish Bagai s decision to not to go for a review also cost them dear, as it looked like Brad Haddin would have been given out had the third umpire been called in.

Once the openers had got their eye in and the Canadians did not take the bowling Powerplay, the Australian openers decided to go ahead with the batting Powerplay in the 21st over. After a cautious first over which cost them four, Haddin slammed Henry Osinde for a couple of fours and followed it up with another three off Rizwan Cheema.

Taking cue from his partner, Watson joined in the party with a couple of sixes off Balaji Rao and then another off John Davison, that recorded being the biggest of the tournament thus far.

Hiral Patel s introduction after he had smashed a half-century saw Watson take full toll by getting 19 in the only over he bowled, and it looked like the race for a century was on when Haddin blasted a four and a six off Davison s fourth over.

It was a very unfortunate manner in which Haddin finally perished, caught down the leg-side off Davison for 88. With the partnership broken, Watson seemed to have lost focus as well and followed his partner into the dressing room for 94 in the very next over. By that time, Australia were 185 for two and it was a matter of the game being all over bar the shouting.

Ricky Ponting s poor form continued when his scratchy innings of seven was ended by Henry Osinde, but the target was achieved in the same over by Cameron White.

Canada had earlier raised miniscule hopes of an upset when they got to 82 for one in the 12th over. The wrecker-in-chief was little Hiral Patel who had been promoted to open the innings and smashed a quickfire half-century before getting out.

Unfortunately, with him dismissed, the run-rate dropped as well and despite a third-wicket partnership of 68 runs between Ashish Bagai and Zubin Surkari, the Aussies would have known that they needed only a wicket to get back into the game.

The partnership was broken in the 29th over when Shaun Tait s wide carrot found the edge of Bagai s bat and was easily snapped up by the wicket-keeper. This was the start of a collapse that saw Canada lose five wickets for the addition of only 19 runs, including Surkari, who made 39.

Karl Whatham, who was making his international debut and Hariwar Baidwan made 18 and 17 respectively but a four-wicket haul from Brett Lee finished Canada off for 211. Tait and Jason Krejza bagged a couple each.

Canada waste good start to be bowled out for 211

Self-over-team approach needs to be censured