Earlier, South Africa trotted to a scored of 145 for six after the end of 20 overs.

Australia defeated South Africa by two wickets in the third T20I played at Sydney on Sunday.Australia started well in their chase to a decent target put up by South Africa.

Aaron Finch did bulk of the scoring early in the innings. He belted two big sixes in the fourth over bowled by Wayne Parnell. Just when he looked threatening, David Wiese dismissed him only in the fifth over of the match for 33 runs. Ben Dunk the other opener for South Africa also went back to the pavilion in the seventh over of the match. Dunk had earlier hit Robin Peterson for a huge six but fell to a good length delivery when he launched it back straight into the hands of Peterson. The wickets kept flowing as Nic Maddinson departed in the eight over while Shane Watson left in the following over.  Glenn Maxwell and Cameron White supplied some momentum to the Australian innings. Maxwell gathered 14 runs from the 11th over bowled by Peterson and leveled the run-rate. Peterson struck again, third time in the match as he removed Maxwell who was taking the match away from South Africa. James Faulkner and White added 25 runs for the sixth wicket before Faulkner was removed by Marchant de Lange. Australia just needed 12 runs from three overs, just when another wicket fell. South Africa kept coming back into the match with regular wickets. The equation got closer as Australia required 10 runs from last 12 balls. Another Australian wicket fell in the last over as Kyle Abbott dismissed Sean Abbot .But Cameron White pulled off the match for Australia in the penultimate ball of the match.

Earlier, South Africa trotted to a scored of 145 for six after the end of 20 overs. The start by the South African batsmen was decent. The opening partnership between Quinton de Kock and Reeza Hendricks was worth 75 runs. The fifth over bowled by Doug Bollinger was worth 17 runs. Runs followed in the next over too as Sean Abbott was treated by two boundaries by de Kock. The flow runs just stopped after de Kock was dismissed by Pat Cummins. The new batsman, Rilee Rossouw also had a short stay at the wicket as he tried to hit a full delivery from Cameron Boyce outside the park but was caught at long on. The 14th over was good one for the South African batsmen as they managed to juice out 12 runs from it. The last five overs turned out disastrous for the visitors as they lost four wickets and and only managed to get 29 runs from it.

Man of the Match: Cameron White

Man of the Series: James Faulkner 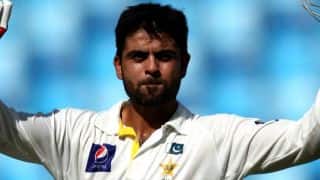