South Africa have ended Day One of the second Test at 214 for the loss of five wickets against Australia at Port Elizabeth.

Australia came back well in the last session of the day to pick up two crucial wickets, and peg back the hosts’ progress after the early jolts in the morning session. Proteas vice captain, AB de Villiers is still batting in the middle, alongside JP Duminy.

Earlier in the day, we got the first piece of drama right at the toss when the South African captain, Graeme Smith goofed up the team sheets right before the toss and was unsure of his playing XI. Ultimately, he announced that South Africa rung in three changes in the form of Dean Elgar, debutant Quinton de Kock and Wayne Parnell.

South Africa’s innings was rocked early on by Ryan Harris and Mitchell Johnson as the pace duo got rid off Smith and Hashim Amla in the fifth and sixth overs respectively. But after the double blow early on, Dean Elgar, who was making a comeback into Test cricket teamed up with Faf du Plessis in a revival mission.

Both the batsmen recovered the South African innings as they took the score beyond the 100-run mark, and also their partnership. Both the batsmen looked settled and composed, before du Plessis lost his concentration a bit in the post-lunch session just after reaching his fifty.

He inside-edged a slight turner from Nathan Lyon, and Steven Smith obliged by holding on to the catch at short-leg. Elgar was then joined by his vice captain, de Villiers. de Villiers and Elgar again strung another 50-run partnership as Elgar was inching close towards what could have been a fantastic hundred.

But when on 83, Elgar lost his concentration, and he too lost his wicket to Nathan Lyon, but I don’t think Lyon would take much credit for that wicket. The South African opener played an absolutely nothing shot, and a resulting top edge was gladly accepted by Ryan Harris at short third man.

de Villiers then carried on, bringing up his half century, but his partner de Kock (who was on debut) couldn’t carry on. He was growing impatient by the minute as square cuts and drives went straight to the fielders. And then finally, he lost his cool and skied a nothing shot to mid-off. That was his end.

de Villiers was then joined by Duminy who is still batting in the middle.

South Africa will have their task cut out for Day Two morning as they cannot afford to keep losing cheap wickets, and have to reach a strong total. Australia, on the other hand, will be happy with more of the same. 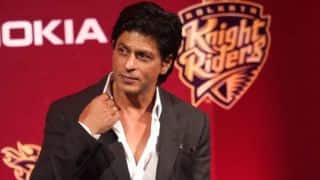