With an 85-run knock on Tuesday, Kohli also managed to equal Rohit Sharma's tally of most 50-plus scores in T20Is.

Australia derailed India’s undefeated streak in 2020 with a 12-run win in the third T20I on Tuesday. Virat Kohli and Co. were riding high on confidence with an 11-match unbeaten streak in T20Is before the game.

Team India had a great run in T20I cricket in 2020 as they register back-to-backs series win against Sri Lanka, New Zealand and Australia. Before Tuesday, the last time when India suffered an away T20I defeat was in February 2019 against New Zealand in Hamilton.

Apart from the defeat in the last T20I, India had a great run in the series as they claimed 2-1 win and players achieved several milestones. Virat Kohli became the only captain in world cricket to beat Australia in all three-formats after former South Africa captain Faf du Plessis.

Kohli guided India to a historic Test series win in 2018/19 by 2-1 on Australian soil, on the same tour, the Men in Blue beat the hosts in ODIs by 2-1. With the win in recently concluded T20I series, the Indian skipper completed his trinity of series-win in Australia.

With an 85-run knock on Tuesday, Kohli also managed to equal Rohit Sharma’s tally of most 50-plus scores in T20Is. The Indian duo is on the top of the tally with 25. Kohli is yet to hit a century in T20Is while Rohit has struck four. It was also Kohli’s first T20I half-century in 363 days.

Meanwhile, chasing a 187-run target in third T20I opener KL Rahul departed for a duck, which was his first since his debut in 2016. The flamboyant opening was dismissed on a duck on his debut against Zimbabwe in Harare.

Earlier, in the second T20I, leg-spinner Yuzvendra Chahal equalled Jasprit Bumrah’s tally of 59 wickets. Chahal is now the joint highest-wicket taker for India in T20Is with India’s pace spearhead. The leg-spinner had a chance to surpass Bumrah’s tally in third T20I but he remained wicketless. 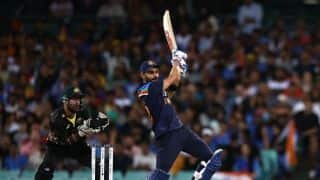