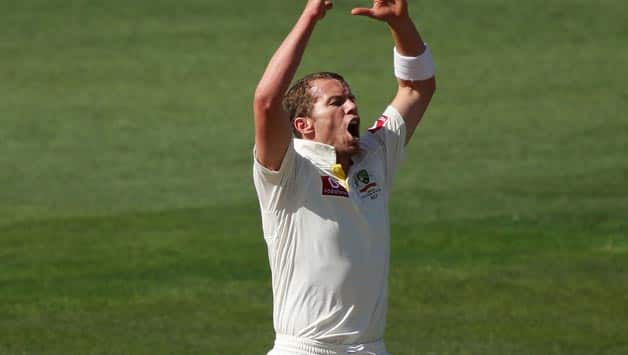 At the end of the day, Australia lead by 141 runs in the first Test at Hobart on day three, with Ed Cowan and David Warner remaining unbeaten on the crease.

Earlier in the day, after rain disrupted the match quite some time, Dilshan and Mathews shared in a record partnership as the tourists frustrated Australia’s bowlers on Sunday.

Dilshan, who reached his 15th century, and prospective captain Mathews put on 161 runs in almost four hours before they were separated with the score on 248 as Sri Lanka closed in on the follow-on target.

It is the highest partnership for Sri Lanka in Australia, eclipsing Aravinda de Silva and Ravi Ratnayeke’s stand of 144 for the seventh wicket at Brisbane in 1989.

Mathews fell shortly before tea, leg before wicket to Peter Siddle for 75 off 186 balls but Dilshan was unbeaten on 132 at the break with wicketkeeper Prasanna Jayawardene yet to score.

Australia, down a bowler with Ben Hilfenhaus off the field with a side strain, toiled hard on the third day, with only Mathews’ wicket to show for their efforts.

Swing bowler Hilfenhaus left the field in the opening hour after delivering just two balls of his 13th over. Team officials said he had a left side strain and was taken to hospital for scans.

He had figures of 1-30 after claiming the wicket of Dimuth Karunaratne for 14 on Saturday.

With Australia’s bowling stocks depleted, it was Sri Lanka’s day after they slumped to 87 for four at stumps on Saturday with experienced batsmen Kumar Sangakkara, Mahela Jayawardene and Thilan Samaraweera back in the dressing room.

Team vice-captain Mathews is expected to take over as Sri Lanka skipper after Jayawardene announced before the Hobart Test that he would be stepping down as captain after the Australia tour.

Australia’s fast bowling ranks have been hit hard with James Pattinson (side), Patrick Cummins (back) and Josh Hazlewood (foot) all out of action.

Pattinson was ruled out for the Test season after suffering his injury during the second Test against South Africa in Adelaide, while Cummins is aiming to recover from stress fractures to his back for next year’s Ashes tour.

The reason for going on and on and on…