Australia lost Chris Rogers early in their second innings, as they extended their overall lead to 209 runs in the first Test against South Africa at Centurion. The hosts were bowled out for 206 in the first innings as Mitchell Johnson claimed seven wickets to help Australia take 191-run lead in the first essay.

After bowling out the hosts for a modest first innings total, Australia reached 18 for one at lunch on the third day of the opening Test.

South Africa’s middle-order mainstay AB de Villiers was unfortunate to have missed out on a century, as he fell for 91 off 148 balls to Johnson. His effort was the only bright spot for the South Africans in their reply to Australia’s 397.

The South Africans resumed their innings at 140 for six, but soon lost Robin Peterson as he could not keep down a delivery off Johnson aimed at the rib cage area, and Michael Clarke did the rest.

Peterson’s dismissal brought Philander at the crease; he added 49 runs for the eighth wicket. His stay at the crease was ended by Lyon, who trapped him in front of the wickets.

De Villiers was unfortunate to have missed out on a century, as he waged a lone battle for the hosts. He batted with ease against the menacing pace of Johnson and against Peter Siddle and Ryan Harris. De Villiers slammed 10 boundaries and two sixes during his stay at the crease.

Johnson claimed three out of four wickets that fell on the third day morning, as Nathan Lyon chipped in with the dismissal of Vernon Philander, who added 49 runs with de Villiers to help his side avoid follow-on. 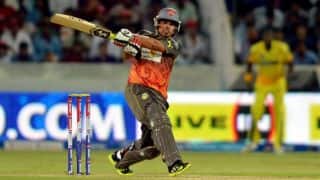