While Zimbabwe stayed in the game till the halfway stage, allowing Australia to score just 262, their incompetence with the bat meant that Australia were still able to canter to a comfortable 91-run win in their campaign opener. 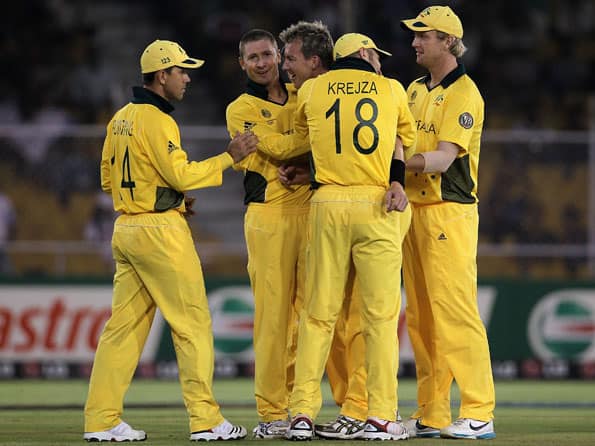 Australia shrugged off two warm-up defeats with an easy triumph over Zimbabwe in Ahmedabad to extend their World Cup streak to 30th consecutive games without defeat. Much had been said about this Australian outfit s ability to defend the title, but come game day it was very much business as usual for the world champions: their batsman rattled up a winning score, their fielders held smart catches, and their fast bowlers proved too nasty and penetrative.

While Zimbabwe stayed in the game till the halfway stage, allowing Australia to score just 262, their incompetence with the bat meant that Australia were still able to canter to a comfortable 91-run win in their campaign opener.

There were times when Zimbabwe did actually inch towards gaining the momentum – as they did when keeping Australia to 61 for 1 in 20 overs, and then getting Shane Watson and Ricky Ponting in successive overs – but could not cash in. In allowing a 63-run partnership between Michael Clarke and Cameron White, they let Australia claw their way back into the match, and calm whatever nerves there might have been in the dressing-room.

For a second time in the match, Australia left the door ajar – losing White during a poor Powerplay – and again, Zimbabwe merely peered inquisitively through, instead of actually kicking the door down.

Australia appeared set to control the match from the time Ponting won the toss and elected to bat. This helped them avoid three and a half hours in 31 C heat, and gave them best use of a slow pitch. As expected, Zimbabwe quickly turned to their spinners their seamers only bowled 11 overs in the innings and Watson and Brad Haddin were kept unusually quiet.

Ray Price, sharing the new ball, was parsimonious and Zimbabwe allowed just 19 runs in the first seven overs. Price bowled a stifling line, keeping it predominantly quick and flat, and with little room on offer Watson and Haddin spent most of their time prodding forward or picking singles off the pads.

Prosper Utseya came into the attack with his variety of off-spin and continued the good work, resulting in Australia scoring just 28 off the first Powerplay.

Watson and Haddin managed to create some breathing room when Chris Mpofu returned to bowl the 14th over. Watson capitalized on room down the leg side with a flick and a pull for boundaries, and then Haddin used his feet beautifully to crack four more over extra cover.

After the lull, the pair was ticking along comfortably but Utseya found a successful UDRS review for an lbw shout against Haddin in the 19th over.

The early part of his knock was patchy, but once Watson got into his stride the Nagpur crowd was treated to some positive strokeplay, with his cutting and pulling being especially pleasing. His scoring-rate improved after he crossed fifty off 69 balls, and three fours and a ferocious six over midwicket hinted at much more.

Instead he fell for 79, struck on the pad by a fizzing delivery from Graeme Cremer and for the second time running Zimbabwe got it right when asking for a referral. Moments later, Mpofu was back in action with an accurate throw from midwicket to run out Ponting for 28 (144 for 3). Australia began the batting Powerplay by losing White, bowled by Mpofu, and managed just 35 off that five-over block, but Clarke s breezy fifty got Australia past 250.

Zimbabwe needed to get a good start against a revved up new-ball attack comprising Shaun Tait and Brett Lee with Mitchell Johnson to follow. Charles Coventry showed signs of intent, slicing a flat six over point off Lee, but the bowler got his man with a well-directed short ball.

Brendan Taylor and Tatenda Taibu s approach to the quick men veered between tenacious and aggressive, and it wasn t surprising that they were dismissed in succession. Taibu steered Johnson to slip where Watson grasped a low catch, Taylor was beaten for pace by Tait attempting to work a straight ball past midwicket.

Moments later, Johnson stretched his vocal cords in an appeal for lbw that was palpably plumb, and for the third time in the match the UDRS came to a bowler s rescue. Craig Ervine was left to slouch away for 0, and Zimbabwe had lost three wickets in 13 deliveries. Johnson continued his good run in India, bowling a probing and economic opening spell (6-1-11-2).

It got worse for Zimbabwe as Chigumbura, ambitiously looking to paddle-sweep Jason Krejza from outside off stump, gloved a top edge which Haddin easily pouched. Ponting called back Tait and a peach of a delivery pitching just outside off and reverse-swinging in at furious pace was far too much for Sean Williams to handle, while Regis Chakabva soon become Krejza s second victim.

With the run rate spiralling out of control Zimbabwe needed 108 from the final 10 overs – wickets tumbled: Utseya (24) chipped Hussey to midwicket; Cremer (37) was excellently held by Haddin off Johnson; and Mpofu became Johnson s fourth wicket.

We have full respect for Pietersen: Borren