South Africa pushed their first innings total well beyond 400 but Australia slowed their charge with four wickets in the afternoon session of the third day at the Gabba. 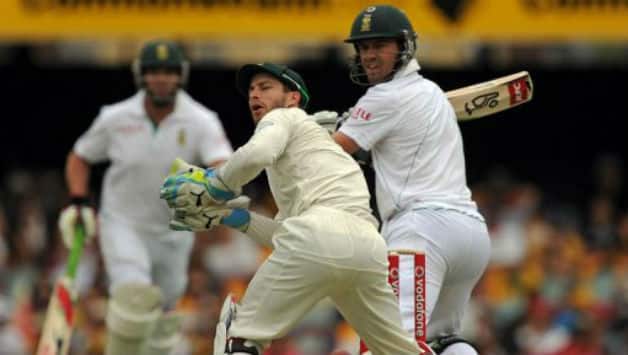 South Africa pushed their first innings total well beyond 400 but Australia slowed their charge with four wickets in the afternoon session of the third day at the Gabba.
The Proteas lost four for 52 during part of the middle session including Jacques Kallis for 147 but advanced their hefty first innings total to 434 for seven off 148 overs at tea.
At the interval, Dale Steyn was on 15 with debutant Rory Kleinveldt not out one.
Australia removed Kallis shortly after lunch when Rob Quiney took a high two-handed chance in the gully off James Pattinson to end the allrounder’s 349-minute stint at the crease.
It was Kallis’s 44th Test century, second on the list of all-time century makers, behind only India’s Sachin Tendulkar, and his fifth against Australia.
His 147 was the highest score by a South African in a Brisbane Test since Eddie Barlow’s 114 in 1963.
Pattinson claimed his third wicket of the innings when he had AB de Villiers well caught by David Warner at point for 40, and Vernon Philander clouted a six before he was caught at first slip by Michael Clarke for 11 off Peter Siddle.
Jacques Rudolph, the last recognised batsman following the series-ending Achilles injury to JP Duminy, was out nearing tea when he holed out to Quiney in the covers off spinner Nathan Lyon for 31.
Before lunch, Hashim Amla reached his third century in four innings against Australia and his 17th overall before he given out lbw to Siddle for 104.
The top-ranked batsman in Test cricket was struck high and TV replays suggested the ball was going over the stumps. Surprisingly, he did not refer Asad Rauf’s decision to the third umpire.
Amla, who became South Africa’s first triple centurion with an unbeaten 311 against England at The Oval in July, put on 165 runs for the third wicket with Kallis.