Australia still have a mountain to climb if they are to save this match.

Australia go to lunch at 14 for no loss with openers Chris Rogers and David Warner still out there in the middle on Day Two of the fourth Ashes 2015 Test at Trent Bridge. Australia still trail by 317 runs and their first target will be to bat out the entire day. Both Warner and Rogers were dismissed for a duck in the first innings and will look to make amends in this innings. Australia’s middle-order too will have to step up as they failed miserably in the first innings. Australia will hope that they can put in a much better show in the second innings and take their side to a comfortable side. England bowlers on the other hand will want to replicate their effort from the first innings. Live Blog: England vs Australia, 4th Ashes 2015 Test, Day 2

England have declared on 391 for 9, thereby securing a lead of 331 after a magnificent spell from Mitchell Starc. England looked set to get to a huge score but Starc’s six wickets managed to restrict England’s hopes of running away with the match. Australia still have a humongous task ahead of them. They will have to bat much better than they did in the first innings, else they will lose by a huge margin. Joe Root was the first man to be dismissed for a well made for 130, who was caught behind. His wicket was soon followed by Mark Wood, who came in as a night watchman, but scored 28. Catch live cricket scores and updates of England vs Australia 4th Ashes 2015 Test at Trent Bridge, Day 2 here

England then kept losing wickets in a hurry as wicket keeper Jos Buttler was dismissed for a quickfire 12 and his wicket soon was followed by that of Ben Stokes for just five. Moeen Ali was then joined by Stuart Broad, who looked to take on the bowling. Broad was looking to carry on from his form with the ball. Moeen and Broad took on the bowling, targeting especially Josh Hazlewood, who was bit for a couple of lusty blows. Moeen was then dismissed for an excellent 38 and it took an excellent diving catch by Steve Smith to dismiss him, giving Mitchell Johnson his first wicket of the match.

On Day One, broad had ripped Australia apart after he registered his career best figures of 8 for 15 as the visitors were bowled out for just 60 in 18.3 Overs. England then piled on the runs and ended the day’s play in a commanding position from where they can consolidate on Day Two and that’s what they did. This after England had won the toss on Day One and elected to bowl first. Both teams made a change each. England got fast bowler Wood back in place of James Anderson and Australia got Shaun Marsh into this game in place of Mitchell Marsh. 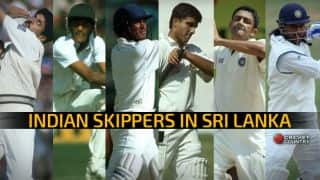 Indian captains and their Test cricket records in Sri Lanka 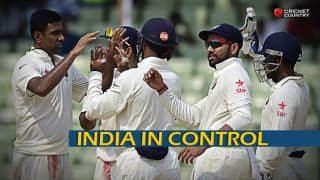