David Warner and Phil Hughes missed out on centuries before veteran Michael Hussey came out to bat in his farewell Test for Australia in the third Test against Sri Lanka in Sydney on Friday. 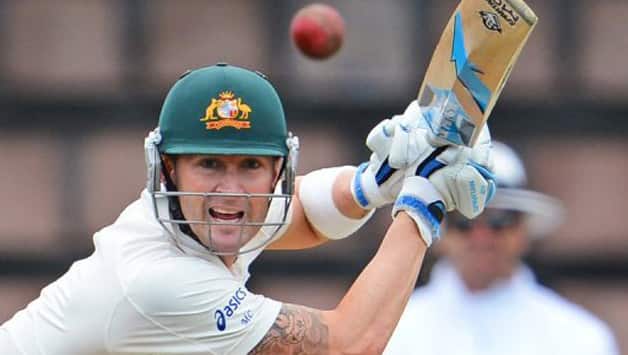 Michael Clarke was unbeaten on 42 at Tea © AFP

David Warner and Phil Hughes missed out on centuries before veteran Michael Hussey came out to bat in his farewell Test for Australia in the third Test against Sri Lanka in Sydney on Friday.

Free-scoring Warner was furious after falling short of his fourth Test hundred when he charged finger spinner Tillakaratne Dilshan and was well caught over his shoulder by Dhammika Prasad, back-pedalling at long-on, for 85.

Hughes followed Warner back to the pavilion seven overs later when he was caught behind attempting to cut left-arm spinner Rangana Herath for 87.

Hussey was given a guard of honour to the crease by the Sri Lankan players amid a huge roar from the SCG crowd in his 79th and final Test after announcing his retirement from international cricket.

At tea, Australia were 241 for three in reply to Sri Lanka’s 294 with Hussey on 18 and skipper Michael Clarke not out 42.

The aggressive Warner’s 85 came off just 84 balls in 150 minutes and he looked in full command of the Sri Lankan attack before his rush of blood.

Warner, who was involved in the run out of his opening partner Ed Cowan in the eighth over, put on 130 runs for the second wicket with Hughes in just 122 minutes.

Hughes also looked on course for his fourth century in his 20th Test before he went for the cut shot once too often.

The diminutive left-hander, who faced 143 balls, played at Herath away from his body and edged to wicketkeeper Dinesh Chandimal.

Already two down in the three-Test series, Sri Lanka’s only early encouragement came when Cowan ran himself out inside the opening half hour after being very much the junior partner as Warner tucked into the tourists’ bowling.

The opening pair had cruised along before Cowan was needlessly run out for four in the sixth over.
Warner clipped Prasad through mid-wicket and Cowan hesitated going for the second run and was beaten to the bowler’s end by Nuwan Pradeep’s throw.

It was the third time in Tests that Cowan has been involved in a run out and twice he himself has been run out.

Clarke, back at the SCG, where he scored 329 not out against India a year ago, lofted Herath for six and next ball went aerial again for four as tea approached.

Indian batsmen have not done badly individually, but they have flopped collectively