All-rounder Dan Christian was left out, while opener Ed Cowan was expectedly handed a Test debut in the final XI announced today by Australian skipper Michael Clarke for the opening cricket Test against India, starting on Monday. 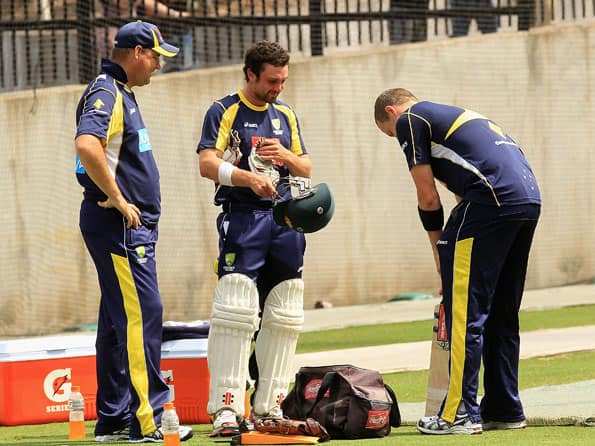 All-rounder Dan Christian was left out, while opener Ed Cowan was expectedly handed a Test debut in the final XI announced today by Australian skipper Michael Clarke for the opening cricket Test against India, starting on Monday.

Left-arm quick Mitchell Starc also failed to find a place in the final XI, which will have pacer Ben Hilfenhaus who is set to play his first Test since last year’s Ashes.

A fit-again Shaun Marsh, who had been battling a back problem, was named at number three after his 99-run knock in a Twenty20 Big Bash knock earlier this week.

The out-of-form duo of Ricky Ponting and Michael Hussey have also retained their positions from the 13-member squad that was announced by the selectors.

“I’m confident we’ve got the best XI to win this Test match in these conditions,” Clarke said.

“I can use Michael Hussey, Ricky Ponting and myself to bowl a few overs. David Warner can bowl a few legspinners. I feel we’ve got the right XI to give ourselves a chance of winning this Test match,” he added, explaining the decision to go with a four-pronged attack. DC (Christian) offers a lot with both bat and ball but unfortunately for him right now we can’t fit him into the XI,” Clarke said.

Clarke said Hilfenhaus’ ability to bowl long spells was a major factor in the decision to pick him for the eagerly-anticipated match.

“I think it plays a part. His control, he’s a very good new ball bowler. He can bowl long spells. He’s had success against India as well. There’s a few reasons we decided to go with Hilfy,” Clarke said.

Speaking on Marsh’ fitness, Clarke said the prolific batsman’s back is finally holding up.

“His back is fine. He’s taken it easy yesterday and today to make sure he’s fully recovered and ready to go come Boxing Day. I’d imagine you’ll see Shaun out here tomorrow facing some bowlers or at least having some throwdowns. He’s 100 per cent ready to go,” he said.

Tour of Australia gives Dhoni the opportunity to reinforce his greatness