Aaron Finch and Steven Smith added 154 runs for the second wicket, but the Indian bowlers staged a comeback and restricted Australia from registering a colossal total.

Cricket is a funny game, and it laughed at Kuldeep Yadav today. After rejoicing the hat-track glory at Eden Gardens, Kuldeep experienced the other side of luck. The Australians, especially Aaron Finch, smashed the Chinaman to pulp, walloping sixes at will. However, no matter how funny the game is, it is also a great leveller. It was none other than Kuldeep who brought an end to Finch s rampage on 124. In death overs, Kuldeep outfoxed the set Steven Smith, further keeping Australia at bay.

The pitch looks grey and dead. Sunil Gavaskar believed that it is a featherbed for the batters, and he himself had the urge of having a go on it. Having said that, when Bhuvneshwar Kumar and Jasprit Bumrah bowled, it appeared to have something for the pacers. But that was an illusion until the ball lost its shine, and the staggering duo of David Warner and Finch went all guns blazing. Given the Indian pacers have been ominous so far, the Australian duo took their time to find feet. The scorecard read 49 for 0 after 10 overs.

Hardik Pandya hates being out of the limelight. If anything, he thrives under tough situations. When Warner was cruising to 50-run mark, the Indian all-rounder got the better of him with an off-cutter. Before Warner could judge the line, the deceitful ball dismantled his defence.

There were times when the odd one kept low. It actually was not easy to score runs, but with the power that Finch possesses, scaling up the scoring rate is not that a difficult task. Missing out on the first two-ODIs, Finch s appetite to score runs was evident. The belligerent batter went on to score his 8th ODI hundred; 1st in Asia. Smith, who was happy playing a second fiddle, reached his 22nd fifty. Together they added 154 runs for the second wicket.

The duo laid the stage for a prodigious score. Australia had Glenn Maxwell to inflict more pain on the Indians. But Kohli was not one to let Australia dominate. He used leg-spinner Yuzvendra Chahal as a bait, given it was spinner Kuldeep who had sent the in-forms Finch and Smith packing.

The outcome could have been worse, but Kohli had to take a risk. It anyway was a mental battle, for Chahal has had dismissed Maxwell in the earlier games. The diminutive spinner approached the same ploy, tossing the ball as slower as possible. And it worked. Maxwell lost his cool, and got himself stumped. MS Dhoni, you know, does not miss these opportunities. He, in process, attained his 100th ODI stumping for India (102 overall: 3 for Asia XI).

Bumrah soon cleaned up Travid Head with a change-in-pace delivery. To make matters worse for Australia, Bumrah had Peter Handscomb caught at long-on in his next over. Marcus Stoinis tried up his best to use the long handle to destructive effect, Australia could manage a mere 59 runs in the death overs, losing 4 wickets. 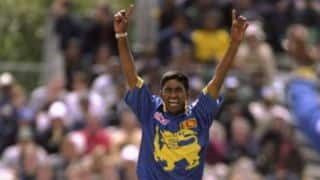