Steve Smith, David Warner and Cameron Bancroft will miss the upcoming home Test series against India as they are serving ball-tampering bans.

Sourav Ganguly has equated the absence of premier Australia batsmen Steve Smith and David Warner from their international squad akin to India missing the services of Virat Kohli and Rohit Sharma.

Smith and Warner, along with Cameron Bancroft, will miss the upcoming home Test series against India as they are serving ball-tampering bans. Although Cricket Australia is considering a demand to lift the bans with immediate effect, the prospect of the trio returning for India Tests looks highly unlikely.

India will begin their tour of Australia later this month with a three-match T20I series followed by a four-Test series in December. Ganguly feels their absence makes it a perfect opportunity for India to record their first ever series win on Australian soil.

“This is like the Indian team not having Rohit Sharma and Virat Kohli. It’s a huge factor,” Ganguly was quoted as saying by PTI on Wednesday. “It’s a great moment for Indian cricket. This is their best opportunity to beat Australia.”

Despite facing a depleted team, the former India captain has advised India to not take the hosts lightly. “But you also have to keep in mind that Australia in Australia are a different kettle of fish. Many feel that they are a weak outfit but I don’t think so,” Ganguly said.

Under Kohli’s captaincy, India have already lost two overseas Test series in 2018 (in South Africa and England). The first Test against Australia starts from December 6 in Adelaide. 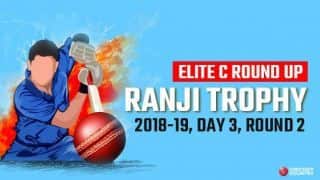