Almost four years after he announced international retirement, 40-year-old left-arm spinner Brad Hogg on Monday stunningly returned to the Australian team by getting picked in the 14-member Twenty20 squad for the two matches against India next month. 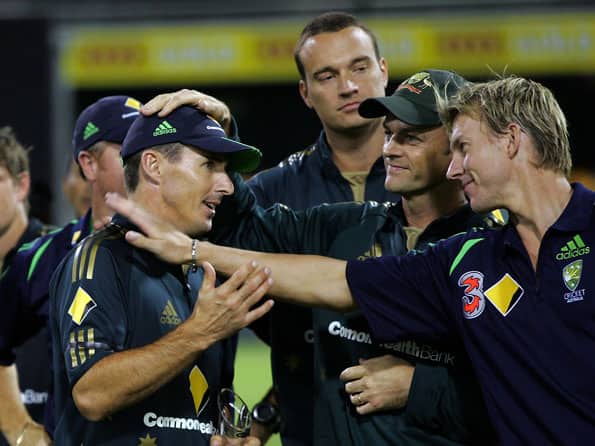 Almost four years after he announced international retirement, 40-year-old left-arm spinner Brad Hogg on Monday stunningly returned to the Australian team by getting picked in the 14-member Twenty20 squad for the two matches against India next month.

“The National Selection Panel unanimously favoured George Bailey as Captain of the T20 team. He is widely respected and regarded as an outstanding captain, having had sustained success in this role. The role of the captain is especially important in fast moving T20 cricket,” Cricket Australia said in a statement.

Hogg had announced his international retirement in 2008 but he had been impressive in the Big Bash Twenty20 League currently being played here.

The two Twenty20 matches against India will be played in Sydney and Melbourne on February 1 and 3 respectively.

“Australia’s T20 Team has been ranked a disappointing sixth in World Rankings. It is considered that the team needs refreshment and a number of changes have been made,” National Selector John Inverarity said.

“The NSP has been discussing this T20 squad for about six weeks and has unanimously decided on the squad, the captain and the vice-captain. The selectors consider this to be a very well balanced T20 squad and look forward to the team acquitting itself very well.

“The NSP has the T20 World Cup to be held in Sri Lanka in September to the fore in its mind with these selections,” he added.

Inverarity said the picked squad is the right mix of experience and youth.

“When selecting any cricket team there are 11 spaces on the team sheet and it is the intention of those selecting the team to name the 11 players who will together form the team that will perform best. It is a very simple strategy,” he said.

“The T20 squad is a strong all-round team. It has batting depth with a good mix of left and right handers, bowlers who have an abundance of specific T20 skills, excellent fielders, plenty of energy and assertiveness and excellent leadership.

All-rounder Shane Watson was not included as he continues his recovery from injury.

“Shane Watson has yet to regain match fitness and was not considered for selection. The intention is for Shane to take however long it takes to become fully fit and then to declare himself available for selection.

The pace attack would be spearheaded by the experienced Brett Lee, who has also shown impressive form in the Big Bash.

“Brett Lee and Bradley Hogg are the veterans in the team and provide a pleasing blend of experience with the youth and relative inexperience in the squad. Brad Hogg’s bowling has been outstanding and his case for inclusion was compelling. He has had a real impact in the BBL in recent weeks.

The Australian squad will assemble in Sydney on January 29. (PTI)

Need to be patient against Australian bowlers, says Virender Sehwag

Preview: Pride at stake as India aim to avoid whitewash