India's famed top-order collapsed yet again as the visitors were tottering at 122 for 5 at lunch on the third day of final cricket Test against Australia, at Adelaide Oval. 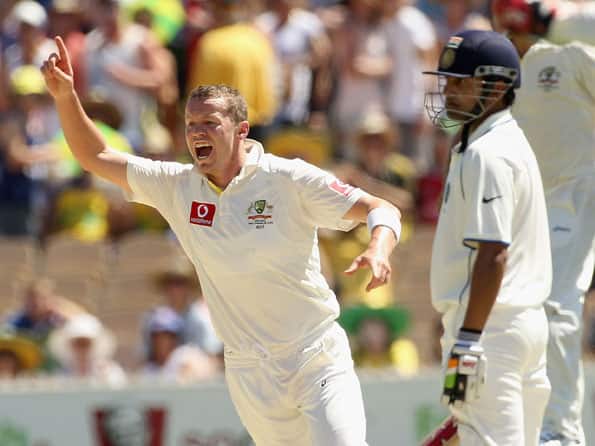 India’s famed top-order collapsed yet again as the visitors were tottering at 122 for 5 at lunch on the third day of final cricket Test against Australia, at Adelaide Oval.

Resuming at 61 for 2, India had all their premier batsmen back in the hut, but for Virat Kohli (21 batting) who was in company of wicketkeeper-batsman Wriddhiman Saha (5 batting).

India still trail by 482 runs to Australia’s first innings score of 604 for 7.

Peter Siddle, for the umpteenth time in this series, hurt India with two scalps first up before VVS Laxman (18) was sent packing off Nathan Lyon’s bowling.

Siddle took care of the two overnight batsmen, Sachin Tendulkar (25) and Gautam Gambhir (34), in a sharp burst of four overs for 16 runs which fetched him two wickets.

Australia began with Ryan Harris and Ben Hilfenhaus and things were generally quiet before Siddle was introduced as first change three quarters of an hour into the day’s play.

Siddle’s first over wasn’t too dramatic from an Indian point of view and Tendulkar, indeed, on-drove him through the widish mid-on fence.

But Siddle had his man in the next over when he drew Tendulkar forward and away from his body and the ball took the edge to second slip where Ricky Ponting held a beautiful catch bending low down. Tendulkar batted for 94 minutes and faced 69 balls, hitting three fours in his 25 runs.

Gambhir, all this while, was largely strokeless at the other end and indeed took 17 balls to add a single to his overnight score of 30 runs.

Gambhir showed discomfort against rising deliveries and sure enough Siddle got him with one which took off from short of good length spot and Gambhir again took his eyes off the ball trying to fend awkwardly. The ball ballooned up and Mike Hussey ran from the gully region and took the catch diving infront.

Gambhir added only four runs from almost an hour’s batting. He batted for 94 balls and hit four fours.

Laxman and Kohli appeared to be dropping anchor and settling in when Lyon broke the lull. He sent a delivery which went straight with the arm and Laxman, misjudging the length, went back to cut it. The ball took a faint edge and Haddin gobbled up the chance gleefully.(PTI)