Pat Howard says that he has no problem if curators want to prepare spicy pitches.

Australia’s debacle in Ashes 2015 was due to lack of experience of their batsmen to play under swinging conditions. To get over this in their future Ashes series they are contemplating to play with English Duke balls in Sheffield Shield cricket and will also practice on pitches with a tinge of green grass on them. This will help them to overcome their weakness against swing and uneven bounce which were the major cause of their defeat in the Ashes. Around six days back former Australian captain Ricky Ponting had stated that Duke’s balls should be introduced in Australia’s first-class cricket. He added that the Duke’s ball swing more than the Kookaburra ones and also have a more prominent seam. READ: Why the Duke ball gives a very unfair advantage to England

Australian team performance head Pat Howard in a conversation with couriermail.com.au added weight to this proposition and said, The idea of using Duke balls in Shield cricket has some merit and we will certainly look at that leading into the next Ashes series in England. We would certainly also be looking at greening up practice pitches and maybe getting batsmen up to Brisbane to practice on fresh pitches during the wet season.” Howard said that the use of Duke’s balls should be in limited basis. ALSO READ: Pat Howard admits Australia s schedule is demanding

Cricket Australia have come under scrutiny over the last couple of years over their decree to pitch curators to prepare flat tracks in domestic matches. However, Howard has different point of view. He says that the curators were just told to make the same Shield pitches as they would for Test matches. Howard further added that in September he will personally bolster the directive that he has no problem if bowling tracks are promoted in Australia. It has obviously been an issue for us to adapt to conditions in other countries and are being criticised for being flat track bullies only. To be a good team you have got to be better than that and play well in all conditions.”

He concluded, If Australian curators want to prepare spicy pitches, I have no issue as long as they prepare the same Shield and Test pitches. The edict wasn t to make Shield pitches flatter. It you are going to play Test cricket at the Gabba or the MCG, the Shield pitch should replicate whatever the Test pitch is. We are particularly supportive of the batsmen playing in England whenever they can. Our bowlers also have to get better at performing in English conditions but sometimes the bowlers workloads are an issue and that might sometimes prevent them from playing in different conditions.”

David Warner’s 11-month old daughter could lay claims to be one of youngest frequent flyers in the world! 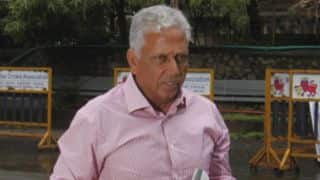 Mohinder Amarnath could be next Chief Selector for India: Reports