Australia vice-captain George Bailey is praying the Manchester weather will not stop his side from giving England a tough time at Old Trafford on Sunday. 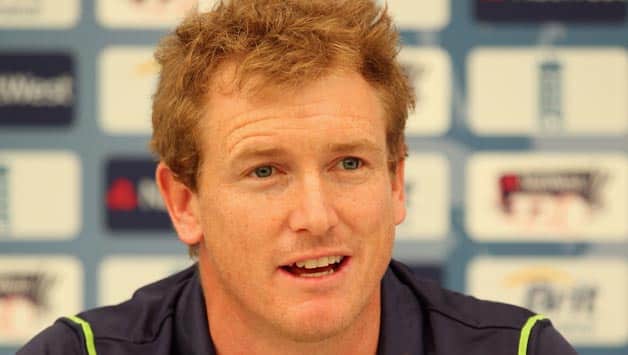 Australia vice-captain George Bailey is praying the Manchester weather will not stop his side from giving England a tough time at Old Trafford on Sunday.

Rain washed out the opening One-Day International at Headingley in Leeds on Friday, leaving the tourists kicking their heels in frustration.

Having picked themselves up from losing the Ashes to come away with a 1-1 draw in the Twenty20 series, Michael Clarke‘s men now want to ensure the long trip home will be a happier voyage.

And Bailey says he and his team-mates are desperate to take out their Ashes disappointment in the shorter game.

“Leeds was very frustrating. There’s nothing worse than sitting in your hotel room and watching the rain fall when you really want to get out there,” he said.

“There was some serious table tennis being played by the boys, but that’s not what we are here for. We want to play cricket and win games. It’s fingers crossed for Manchester, but we also have a game in Birmingham [on Wednesday], where a few of the guys say they have played but never completed a day without it raining!”, Bailey said.

“Losing the Ashes the way we did left a sour taste in the mouth. You just want to get back out there and put things right. Winning the ODI series would at least give all the boys a lift, so we are desperate for some sunshine in Manchester after the rain in Leeds.”

“We are also planning and building towards the next World Cup. So it’s important not to miss out on any competitive 50-over action between now and then. We have some fresh new faces from the team which lost the Ashes. Those guys want to impress and throw down their hats to stay in the side,” he said.

Acting England skipper Eoin Morgan is keen to use the One-Day Internationals as a springboard to get involved in the return Ashes series in Australia later this year.

Irish-born Morgan, who scored a century against the land of his birth in a warm-up game ahead of the current series, said: “I would love to get back into the Test team and go to Australia.

“If that opportunity arose at the end of the summer, I would be a very happy man.”

After the match at Edgbaston on Wednesday, the sides reconvene in Cardiff on September 14 before the fifth and final one-day match in Southampton on September 16.