Australia maintain their supremacy in the points table while New Zealand follow them in the second position with 2 points from their last match.

In what can be called a match of many milestones, Australia defeated New Zealand by 5 wickets to maintain their unbeaten streak in the Trans-Tasman tri-series. Winning the toss on Friday at Auckland, Kane Williamson opted to bat and sent regular openers Colin Munro and Martin Guptill to open. They put up a 132-run stand which powered the hosts to a mammoth of 243 for 6 in the 20 overs. Australia kept their nerve strong, going all guns blazing and chasing down the total in 7 balls to spare.

David Warner and D’Arcy Short replicated Munro and Guptill’s efforts, putting up a 121-run opening stand. Warner and Short both scored half-centuries. It was Short’s maiden fifty in international cricket. Ish Sodhi bowled Warner with a googly to give New Zealand their first breakthrough, in the ninth over. Short kept going, supported by Chris Lynn (18) and Glenn Maxwell (31). Despite losing wickets at regular intervals, Australia’s run rate remained unaffected.

Short departed after Australia had 200 on the board. He went to pull a short ball by Trent Boult and departed for 76. Aaron Finch took charge and took the team to victory with his unbeaten 36, which consisted 3 fours and 3 sixes.

This is the highest successful chase in the history of T20Is. The previous best was West Indies’ chase of 236 against South Africa. Short was named the Man of the Match for his stupendous knock.

Earlier, Guptill and Munro’s destructive batting allowed New Zealand to put up a challenging total. Guptill became the highest run-getter in T20Is and also scored his second T20I hundred, becoming the third New Zealand cricketer to do so. England are yet to register a victory in the series.

Player of the Match: D’Arcy Short. 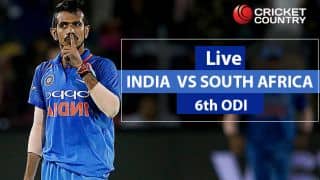