Australia have got off to a very good start in the fourth innings.

Australian openers, David Warner and Chris Rogers scored quickfire fifties as Australia have raced to 141 for the loss of one wicket at the end of second session on Day Four of the second Test against South Africa, chasing 448 to win the match.

Rogers and Warner started off in brilliant fashion, scoring quickly right from the start. Warner took his time early on, as Rogers donned the role of being the aggressor. Once Warner got set, he took the attack to all the South African bowlers. He hit Morne Morkel for 18 in an over (comprising of 4 fours), and then again hit Dale Steyn for nine.

He reached his fifty in just 52 balls, as Australia crossed the 100-run mark inside 25 overs, which meant that they were scoring at 4 runs an over. Rogers too, soon brought up his fifty with a boundary off Morkel.

Both the openers were looking in sublime touch, untill JP Duminy finally got the better of Warner, trapping him leg before wicket. Warner wasn’t convinced by the umpire’s decision, and reviewed it, but the replays showed the umpire was right, and Warner had to depart.

Warner’s dismissal brought Alex Doolan to the crease who faced some initial hiccups against Steyn’s bowling. 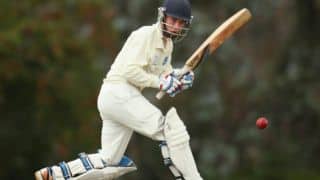