South Africa are in control of this Test match.

Australia have ended the first session of Day Four of the second Test at 31 for no loss in their second innings, chasing the huge target of 448 to win the Test. Both their openers, Chris Rogers and David Warner have looked comfortable against Dale Steyn and co. so far.

Earlier in the day, South Africa declared their second innings at 270 for the loss of five wickets,  thus setting Australia a target of 448 in the fourth innings to win the match.

They then batted aggressively in their second outing, with Hashim Amla leading the way with a magnificent ton (127 off just 176 balls), and with small contributions from AB de Villiers and Quinton de Kock, thus managing to amass 270 for the loss of five wickets in just 64 overs.

They therefore stretched the lead to  447, before Graeme Smith felt it is a big enough total for them to successfully defend and declared the innings.

Australia will be hoping for an improved show with the bat in their second innings. The pitch has deteriorated over the course of four days so far, but is still a very good batting track. The South African attack will be missing the services of Wayne Parnell in the second innings as the paceman suffered a hamstring injury during the second innings.

South Africa will expect Morne Morkel to bowl with equal venom and spite as in the first innings. 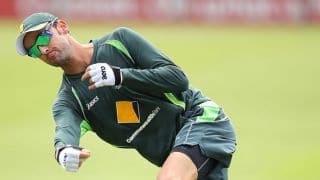