Mitchell Johnson and Ryan Harris were batting at the crease when the first session ended.

Australia‘s middle-order batsmen Steven Smith and Shaun Marsh essayed centuries to take them to 374 for seven and put them in a position of strength at the end of first session of the second day’s play against South Africa at Centurion. Mitchell Johnson and Ryan Harris were batting at the crease when the first session ended. Alex Doolan made 27 runs.

On a wicket with a bit of grass in it, Australia would be happy with their position in the game. For South Africa, both Dale Steyn and Ryan McLaren picked up two wickets each. Morne Morkel and Vernon Philander picked a wicket each for South Africa. 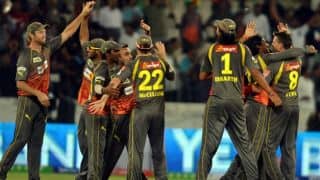