Australia were reeling at  36 for the loss of two wickets in the second innings of the second Test match against Australia at Abu Dhabi on Sunday.

The second session of the fourth day was an eventful one, as it saw both Misbah ul Haq and Azhar Ali scoring hundreds. Misbah’s knock was special because it equaled Sir Vivian Richards’ record of fastest Test hundred. The Pakistani captain reached the landmark in just 56 balls, and hit 10 fours and a six during his knock.

After the two batsman had completed their hundreds, Pakistan declared their innings. Australia had to bat a little more than four sessions in order to save the Test match, and they started on a bad note. Chris Rogers departed early after Asad Shafiq took a simple catch at leg slip. Glenn Maxwell who came at No 3, didn’t last long as he was dismissed LBW by Zulfiqar Babar. 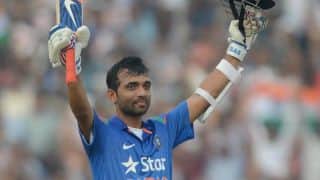